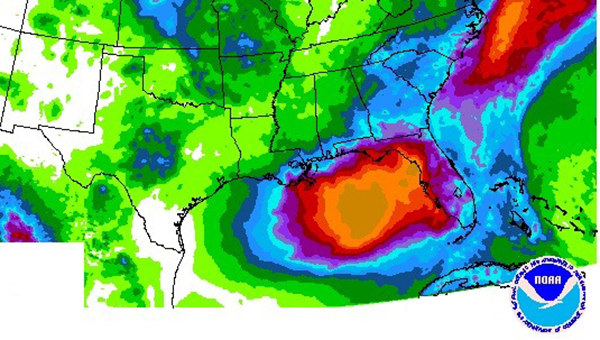 National Oceanic and Atmospheric Administration forecast image for potential tropical development in the Gulf of Mexico.

Forecasters and emergency management officials along the Gulf Coast are keeping an eye toward the east, where a low-pressure system in central Georgia is predicted to move south into the Gulf of Mexico.

“We should know more by the later part of the week,” National Weather Service meteorologist Daniel Lamb said. “It could take on tropical characteristics and at that point there is an 80 percent chance that a tropical depression will develop by the end of the week over the northern Gulf.

“What happens beyond that as far as track is pretty uncertain,” he said. “There’s a pretty good chance it’s going to produce a lot of rain, generally along Gulf Coast. Whether that will impact the Vicksburg area or central Mississippi remains to be seen at this point.”

“It could potentially move west,” he said. “The models indicate a westerly track, but with systems like this, it’s hard to be certain (on the track) until they develop.”

Warren County Emergency Management director John Elfer, who participated in a conference call with Weather Service officials Monday about the system, said computer models have the system “going anywhere from Georgia all the way to Texas. It’s too early to tell. Probably in the next 48 hours we’ll be able to tell.”

If the system moves into the Vicksburg area, Weather Service hydrologist Marty Pope said, “I think the biggest problem would be if this thing came and sat over the backwater areas; that would be a disaster.

“That would be the worst scenario; if the system doesn’t develop and has a lot of tropical moisture with it, and starts dropping a lot of rain, that’s probably the worst case scenario for the backwater area,” he said.

The other problem for the area, he added, would be if the system reached into the Ohio River Valley and stalled.

“The biggest danger with those systems is they usually are weak,” Pope said. “They don’t move with the steering currents that well because they’re so weak and have a tendency to wander around.

“There’s a lot of uncertainty.”