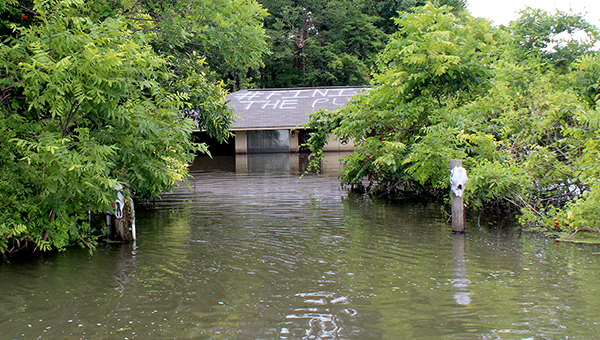 A home on Floweree Road near Redwood displays the hashtag “#finishthepumps on its roof. Warren County Sheriff Martin Pace said all of the homes on Floweree Road, Whitaker Road and Perry Circle are surrounded by floodwaters. Many farms in that area, as well as the MaHannah Wildlife Refuge, are also underwater. (Catherine Boone Hadaway | The Vicksburg Post)

The U.S. Army Corps of Engineers Sunday closed the Steele Bayou Control Structure gates to prevent backflow from the Mississippi River into the backwater area.

Marty Pope, hydrologist with the National Weather Service Office, said the riverside is expected to remain at a higher level than the backwater, or landside area, for at least several days.

“Looking at everything now, we’re really not going to get too much relief until probably about the weekend,” he said. “Looking at it, it’s (the Mississippi) going to hang steady for a little bit now.”

The present level of the Mississippi is 49.6 feet. It is forecast to stay at 49.5 feet through Wednesday before falling to 49.3 Friday. The riverside level of Steele Bayou is 97.67 and the landside level is 97.59 feet.

The high river level, Pope said, is caused by water draining from other backwater areas along the Mississippi north of Vicksburg and from the Arkansas River Basin, and slowing the river’s fall here.

“With everything draining down out of the (backwater) system, it’s taking so long for this water to finally get out,” he said. “You’ve got all the backwater areas on the Yazoo itself that are draining, so it’s not allowing the river to fall, and it’s not getting a whole lot of support from above (the Arkansas River Basin).

There are areas in eastern Arkansas, Pope said, where backwater stored during the flooding is now trying to drain into the Mississippi.

“When we get back here (around Vicksburg), we’ve still got a lot of water backed way up Yazoo River, too,” he said.

Until the river gets a good fall from above the Arkansas River, Pope said, there will not be a good fall in the Mississippi at Vicksburg.

“All the backwater that’s backed up in these areas is having to drain back (into the river) slowly, and until we get a real good strong fall from up above, it doesn’t allow the river to fall any, and in fact can cause the river to rise up a little bit.”

The Mississippi River has been above flood stage since February, forcing the U.S. Army Corps of Engineers Vicksburg District to close the Steele Bayou Control Structure Feb. 15, when water on the structure’s riverside was higher than the landside.

Once the structure was closed, water in the Yazoo Backwater Area rose, reaching a level of more than 98 feet, the highest since 1973, forcing the Warren County Board of Supervisors to order a mandatory evacuation of the Eagle Lake community, which remains flooded.

The Corps on several occasions briefly re-opened Steele Bayou when the riverside level dropped, but then had to close the gate when the water level rose.