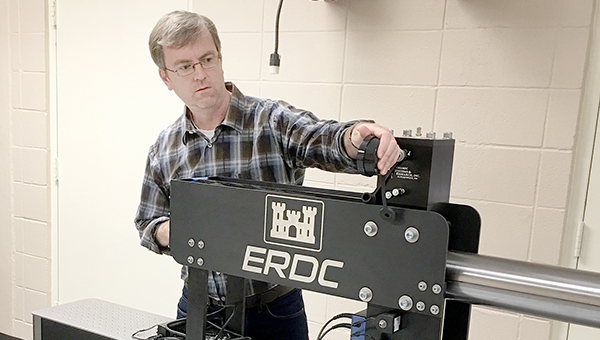 Dr. Bill Heard, senior researcher in the Geosciences and Structures Division, a component of the Geotechnical and Structures Laboratory, U.S. Army Engineer Research and Development Center, was named the recipient last week of the Presidential Early Career Award for Scientists and Engineers.

This award is the highest honor bestowed by the United States Government to outstanding scientists and engineers who show exceptional promise for leadership in science and technology early in their careers.

Heard is the only recipient from Mississippi.

He is a lead researcher in Survivability and Protective Structures, a primary GSL research focus within the ERDC Military Engineering business area.

His research focuses on the complex phenomenology of weapons’ effects against conventional and unconventional structures to develop novel solutions and new experimental techniques to enhance computational methods for applied and basic research.

Prior to joining GSL in 2004, Heard worked as a structural engineering consultant and chief engineer and vice president at Jackson Stone Company, an architectural precast concrete manufacturer.

He has published over 100 technical publications and five patents, with two additional patent applications currently under review.

Established in 1996, the PECASE acknowledges the contributions scientists and engineers have made to the advancement of science, technology, education, and mathematics (STEM) education and to community service as demonstrated through scientific leadership, public education, and community outreach. The White House Office of Science and Technology Policy coordinates the PECASE with participating departments and agencies.