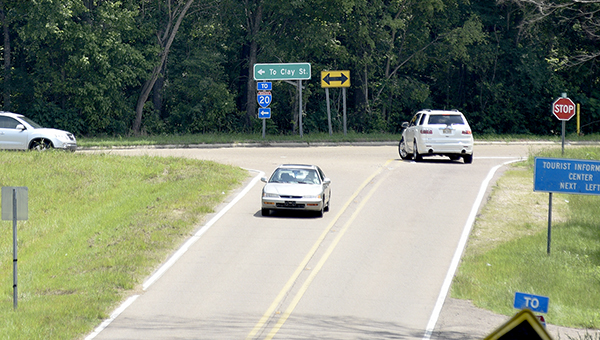 The project is designed to link restaurants, hotels and businesses on East Clay Street and U.S. 80 to the west side of South Frontage Road using an overpass crossing the Kansas City Southern railroad tracks.

“Thank God,” Port Director and Vicksburg-Warren County Partnership member Margaret Gilmer said. “It absolutely needs to happen. The frontage road has got to happen for Vicksburg to enjoy any kind of resurgence in retail development.”

Getting the extension, she said, “has always been important, but now it’s critical. The frontage road was never about just the outlet mall. It was connecting East Clay Street to Halls Ferry to get that traffic off I-20 and over to Home Depot and the other (Vicksburg) mall. It needed to go in years ago.”

“It’s been a long time coming and we’re thankful that we’re about to begin construction,” Mayor George Flaggs Jr. said.

He said the extension will significantly improve development in the East Clay Street area.

“It is exciting to see that the long awaited South Frontage Road extension is finally being bid for construction,” said Pablo Diaz, Partnership executive director. “Many Vicksburgers have fought for many years to see this project to completion and they will soon be able to see the fruits of their work.

“Retail is changing at a fast pace and such an upgrade in infrastructure will make that area of town more attractive and adaptive to the new trends in retail development and growth.”

Dr. Bill Heard, senior researcher in the Geosciences and Structures Division, a component of the Geotechnical and Structures Laboratory, U.S.... read more