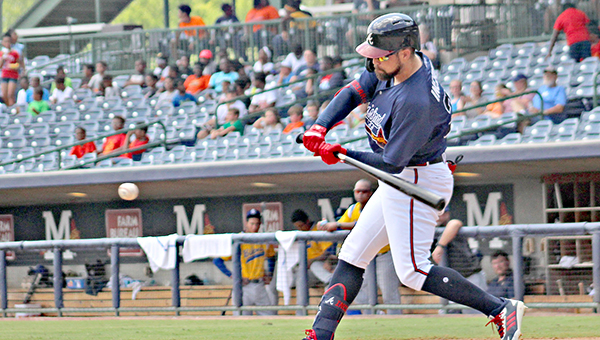 Ender Inciarte bats for the Mississippi Braves Tuesday against Biloxi. Inciarte, an outfielder for the Atlanta Braves, was on an injury rehab assignment with the team’s Double-A affiliate in Pearl. (Ernest Bowker | The Vicksburg Post)

PEARL (AP) — Tyler Neslony hit a two-run double in the seventh inning, leading the Mississippi Braves to a 7-4 win over the Biloxi Shuckers on Tuesday.

The double by Neslony, part of a three-run inning, gave the Braves a 5-3 lead before Neslony scored when a runner was thrown out later in the inning.

The Braves tacked on another run in the eighth when Riley Unroe scored on a fielder’s choice.

Jason Hursh (2-2) got the win with two innings of scoreless, one-hit relief while Cody Ponce (1-2) took the loss in the Southern League game.

During the six-game series, the Braves went 2-4 against Biloxi to continue a tough stretch since the Southern League All-Star break.