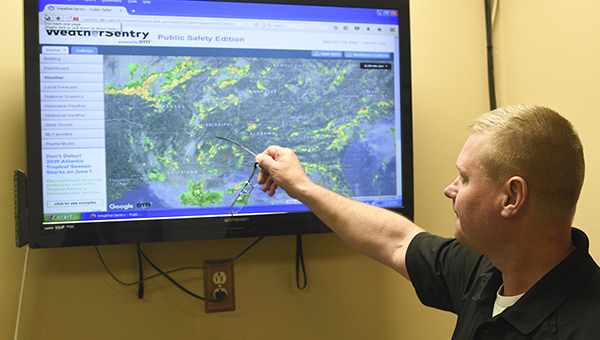 Local emergency management officials are continuing their vigil and starting preparations in the event a developing tropical system  in the Gulf of Mexico intensifies and moves into Mississippi or east Louisiana.

The system developed in central Georgia earlier in the week and has since moved into the Gulf of Mexico.

Alan Campbell, a meteorologist with the National Weather Service office in Jackson, said the system is forecast to intensify over the next 24 hours.

“Right now, the official track from the National Hurricane Center shows the storm continuing west southwest across the northern Gulf Coast before making a turn to the west northwest,” he said.

According to a graphic on the National Hurricane Center website, the system is projected to make landfall in the Lake Charles, La., area Saturday morning as a hurricane. It would be named Barry.

“There’s still a good degree of uncertainty out there in the exact track,” Campbell said, “But most of the major models we look at and rely heavily on are showing landfall west of us — the Texas-Louisiana line — hopefully that will hold true.”

“We’re planning on flash flooding, primarily,” he said. “Flash flooding and saturated ground with the trees if we get any wind with this stuff.”

And he’s keeping an eye on the storm’s track.

“All the models don’t agree yet, and I won’t really be comfortable about where this thing’s going until Friday,” he said.

If the system’s track continues west, Campbell said, Warren County will see showers and thunderstorm activity across the area.

“If it looks like the track is indeed that far to the west, or even further points west to Houston or Corpus Christi, that area there, that would take the potential for the very heavy rainfall west of us.” he said.

“I’m not saying we couldn’t have some possibly localized flash flooding issues, because even scattered showers and storms that pop up across that time with a moist atmosphere will be pretty efficient rain producers.

“If you get a couple of those showers and storms move over the same area over a short amount of time, you could have some localized flash flooding,” he said.

A worse case scenario, Campbell said, would be the storm stalling over the Arkansas River Basin where there has already been serious flooding, “That would come into the Mississippi above Grenville and cause more rise.”

Elfer said his biggest concern is having the system make landfall, turn east and stall over the Delta with heavy rain.

“That is going to flood some more homes in Eagle Lake, and some other places,” he said. “So I’m more concerned about the rain than I am the wind threat and any of the other stuff.”

As for the timing of any impact to the Warren County area, Elfer said that is still a moving target.

“I’m being told that it’s a very slow mover, and whoever gets it, it’s going to stick around for a while. One model I’ve looked at shows us getting it on Sunday — a little bit Saturday, a little bit Sunday. I’m planning for the weekend and into Monday,” he said. “But there’s still a good 48 hours from having a good handle on where this thing’s going to go.”

Based on the present forecast, Campbell said, the heavier rainfall will be west of Mississippi.

“One thing we will see across the area anytime you’re on the eastern side of a landfalling tropical system, you do have increased wind shear aloft in the atmosphere, so you do end up with a chance for isolated severe storms across the area,” he said. “We could have an isolated storm that could produce a weak spin tornado.”