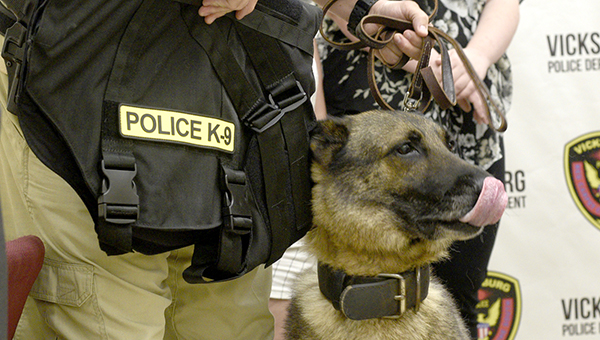 After months of fundraising, the ninth-grade student council at River City Early College saw their efforts truly pay off Wednesday.

The students raised money to pay for four ballistic vests for the city and county’s K-9 units, and at the Vicksburg Police Department Wednesday, the four dogs were each presented with a vest.

“This makes me feel like I can do something in the world. I know a lot of things are out of my control, but knowing I could help these dogs makes it a lot better,” River City Early College student Mary Claire Lovins said.

“We have been working ever since December, so this is such a sense of accomplishment,” Cook said.

Prior to the start of the fundraiser, the students presented a program to both the city and county K-9 officers about their idea and what they wanted to do.

After receiving approval from the officers, the students set a $4,000 goal in an effort to cover all costs, including tax and shipping and handling, for ballistic vests for each of the dogs.

Vicksburg Police Lt. Leonce Young, a K-9 handlers with the Vicksburg Police Department, said the vests will serve as a protection for the dogs when they go into dangerous situations.

“It is officer safety when you send a dog in,” Young said, since the dog is pretty much serving as a shield for the officer.

“These are some of the hardest working employees of any law enforcement agencies,” Warren County Sheriff Martin Pace said of the K-9s. “These dogs will work 24/7 and if you let them they will literally stand between the handler and harm’s way.

“They will give their life for the deputy and they will find dope and lost kids and anything you tell them to find, so we appreciate the students and the faculty for acknowledging these little guys because they are some hardest working officers.”