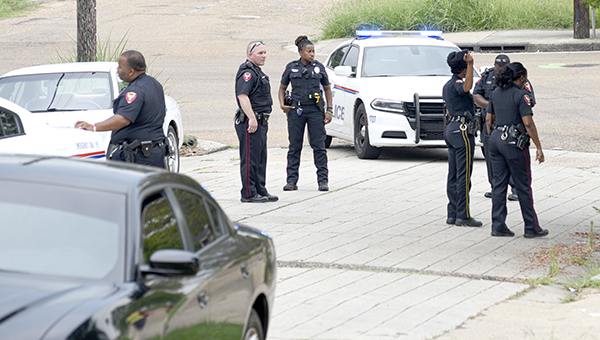 Vicksburg Police Department Officers respond to a street fight and shots fire call near the intersection of 2nd North and Clay Street around 3:30 p.m. Wednesday. No injuries were reported. (Courtland Wells | The Vicksburg Post)

No one was injured in the shooting, according to police.

Earl faces charges of drive-by shooting. They are being held without bail in the Madison County Jail pending an initial appearance in Vicksburg Municipal Court 10 a.m. Friday.

According to police reports, Jacobs and Earl believed one of the people in the house had stolen a bicycle and went to the house to confront the alleged thief. When they got to the house, an argument occurred and the couple got into the car and began shooting at the house and drove off.

Officers later stopped the car the couple was in and took them into custody.