All-star team getting ready for trip to Waco 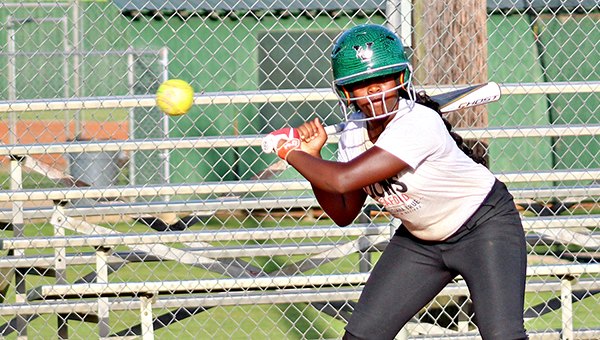 Trinity McGloster watches a pitch go by during practice with the VGSA 12U All-Stars. The team will play in the Little League Softball Southwest Regional July 24-28 in Waco, Texas. (Ernest Bowker | The Vicksburg Post)

The sun had just started to dip in the sky over Halls Ferry Park on a hot, humid evening, and the end of a 90-minute practice session for the Vicksburg Girls Softball Association’s 12U All-Star team was in sight, when first baseman Alli Grace Luke piped up to complain.

“Can we go another hour?” she asked.

Even with a packed schedule that includes practices and games with two or three other teams, as well as some fundraising efforts, the All-Stars were ready for more softball as they began their quest to be the best.

The VGSA squad will head to Waco, Texas, for the Little League Softball Southwest Regional July 24-28. It’s the second year in a row the VGSA will send a team, and serves as the finale for this sliver of the schedule — unless they win, of course, and earn a trip to the Little League World Series.

The VGSA joined Little League last season and had a solid showing at the Southwest Regional. Its all-stars won two games in the double-elimination tournament before being eliminated by eventual champion Louisiana.

A new cast of players will head to Waco for this year’s tournament, but manager Jeremiah Pant expects them to hold their own.

“We’re expecting the girls to get some real good experience,” Pant said. “We’ve got a pretty good team put together, and I think we’ve got a real good chance to win a couple of games.”

Even for a team that is already seasoned in the ways of travel softball, the Little League regional is more than just another weekend tournament.

State champions from Mississippi, Colorado, Louisiana, New Mexico, Oklahoma and Texas will compete for a spot in the Little League World Series Aug. 7-14 in Portland, Oregon. The Southwest Regional will be televised on ESPN-Plus and the Longhorn Network.

It’s an altogether different experience than what they’re used to, which makes it exciting, pitcher-infielder Lili Kistler said.

“It’s kind of nerve-wracking, because you’re nervous to mess up but you’re also excited to get noticed on TV, and your friends and family get to see you,” Kistler said.

Getting to Waco — and beyond — is also a major logistical and financial undertaking. The VGSA pays some of the costs, but not all, especially since it also has a 16U team heading to another regional in Louisiana this month.

To make up the difference for a trip Pant estimates will cost around $10,000, the team has been conducting fundraisers and finding sponsors.

In late June, players bussed tables at Newk’s on Pemberton Square Blvd. as a fundraiser. The restaurant donated a percentage of its sales during their shift.

A few days later, the team held a car wash. A couple of small tournaments and camps are also planned to add to the total.

“The girls and their parents raised over $6,000 the last couple of weeks. Parents are going out and getting sponsors. We have over $3,500 worth of sponsors and made $1,000 from the car wash,” Pant said. “The girls that were at the car wash realized the value of hard work.”

Kistler added it has helped the players come even closer together as they chase a common goal.

“It helps us and it bonds us as a team,” Kistler said. “We’re really good friends.”

Sports you can enjoy during the doldrums