Up to 10 inches of rain expected from Barry 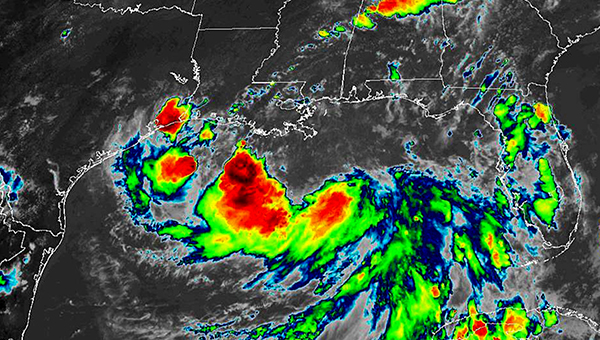 If Tropical Storm Barry maintains on its present course, Warren County residents can expect heavy rain, high wind and the possibility of tornadoes, according to information from the National Weather Service.

“We can expect 6-10 inches of rain and tropical storm force winds,” Warren County Emergency Management director John Elfer said, “and there will be a slight chance for tornadoes.”

Elfer’s comments came at a meeting of city and county officials and first responders Thursday. The projected heavy rains mean more water for the Yazoo Backwater Area, which has been flooded since February. It also means more homes in the Eagle Lake community could be flooded.

Meteorologist Alan Campbell, with the National Weather Service office in Jackson, said Barry’s current projected track forecasts landfall at Morgan City, La., about 7 a.m. Saturday. Once it hits land, the storm is expected to move north and be out of the state by Monday.

Presently, Vicksburg’s Second Saturday events remain on schedule, while the Vicksburg Farmers’ Market will be held in the city’s south parking garage.

Barry was elevated to a tropical storm about 10 a.m. Thursday after Hurricane Hunter aircraft flying through the storm detected wind speeds more than 39 mph, the minimum wind speed for tropical storm.

Campbell said the storm is expected to encounter wind shear as it approaches landfall, which could weaken it.

“It will come ashore either as a weak Category 1 storm or a strong tropical storm,” he said. “It depends on what resistance it encounters.”

Either way, Campbell said, the storm will be a rainmaker.

“If we get the rain that’s predicted, we will have flash flooding and some streets will go under. Sky Farm (Avenue) and Paxton will go under,” Elfer said. “This is a good time for people to start getting ready for the storm and be prepared for flooding and power outages.

“I think from last experience we had with storms in the area, the people have become more storm conscious and understand what it means to be storm ready.”

Peter Nimrod, chief engineer for the Mississippi Levee Board, said one advantage for the Yazoo Backwater Area is the re-opening Thursday of the Steele Bayou Control Structure.

“That’s great,” he said. “The (Mississippi) river is supposed to start dropping a couple of tenths a day over the next couple of days, and that’s going to help; some of this backwater is going to start evacuating.

The question, Nimrod said, is where Barry will go.

If it goes west of Warren County and the Delta and parallels the Mississippi, he said, “That’s the worse case scenario, because all the rainfall from that storm fall out on the east side.”

It it passes over the area or east, he said, that will mean less rain for the area.

“We just don’t know for sure. It all depends on where it falls before we can tell how it’s going to affect the backwater,” Nimrod said. “The only good thing is that the gates are open so we’ll see a little bit of a fall.”