Vicksburg 16U All-Stars having fun, working hard ahead of regional 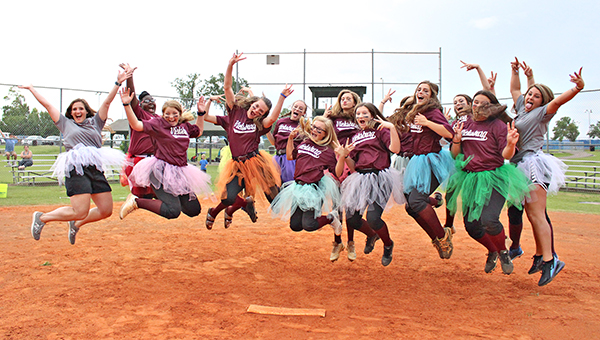 Members of the Vicksburg Girls Softball Association’s 16U All-Star team leap into the air during a photo shoot at Halls Ferry Park. The 16U All-Stars will play in the Little League Senior League Softball Southwest Regional July 20-24 in Pineville, La. (Ernest Bowker | The Vicksburg Post)

The Vicksburg Girls Softball Association’s 16U All-Star team is, in fact, a Warren County all-star team. A lot of its players are also on one or two other travel and high school teams, and have gathered for this one more as a summer side project than an ongoing concern.

It was hard to tell that, however, as they wore multi-colored tutus for a team photo shoot, joked with each other and cut up before hitting the field for practice, all is if they’d been together for years.

“We have the philosophy out there that none of us are getting paid, so if we can’t have fun doing it then we’re not going to be out here,” coach Ashley Dawson said. “Yes, we want to play and we’re serious. But it’s still a game. And you play better when you’re having fun. If you can’t walk on the field with chemistry, you’re going to walk off the field with a loss. The fact that they walk through that dugout and it’s already there, and they’re able to mesh and have that chemistry on and off the field is huge for this.”

“This” is the one tournament the 16U All-Stars will play this summer, and it’s a big one. They’ll head to Pineville, La., for the Senior League Softball Southwest Regional July 20-24, with a chance to play for a national — and world — championship if they win.

Dawson said the chance to move on and play for something bigger makes this a far different tournament than an ordinary travel ball weekend.

“For all of us, it is the experience of this. The build up to it, knowing what it could lead to, adds that level of excitement for all of us. It’s a little bigger,” Dawson said.

Vicksburg’s first game in the Southwest Regional is July 20 at 6 p.m., against the Colorado state champion. The seven-team regional will also include squads from Louisiana, Texas and New Mexico.

The VGSA All-Stars are the Mississippi champions by default, since the VGSA is the only Little League-affiliated program in the state. That hardly takes away from the opportunity in front of them, or their chances of winning.

“I think it’s great to be able to take a great group of girls that represent not just our city, but our state, to play something they love,” Dawson said. “It’s huge. It’s one of those things that we get overlooked a lot for our talent, and we have it here. We’ll be able to showcase it.”

This will be the VGSA All-Stars’ second trip to the World Series. They went 1-2 last year, with both losses coming by one run. Seven players are returning from that team, and two others were on the 12U team that played in that age group’s regional in Waco, Texas.

Most of the returning players also have a year of high school softball experience under their belt now.

“It’s going to help a lot. The ones we do have from last year have a lot more experience, because we do play on high school softball teams,” pitcher Maddie McAdam said.

Because of their experience last year, and from playing together on other high school and travel teams, the All-Stars are no strangers to each other.

The familiarity and the team chemistry it breeds are important for a one-off tournament like this, McAdam said.

Win or lose, it also makes for a fun time.

“The team chemistry, with them coming together in a short amount of time, is there. Even in goofing off moments, everybody is together,” Dawson said. “They’re here to play ball. They want to have fun. They’re ready to win.”