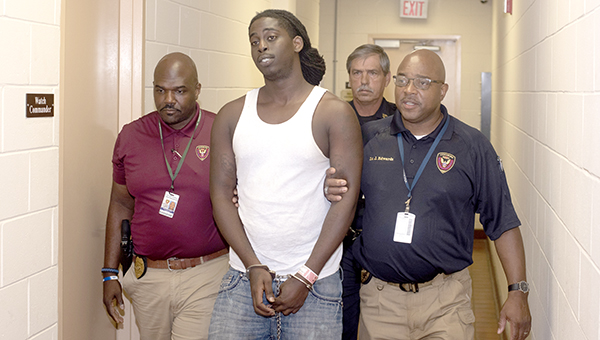 Officials lead Antwan Demond Jacobs into municipal court Friday for his initial appearance. Jacobs is charged in connection to a drive-by shooting Wednesday afternoon. His bond was set at $100,000 by Judge Angela Carpenter. (Courtland Wells | The Vicksburg Post)

Bond has been set at $350,000 for a Jackson man accused of shooting into an occupied home Wednesday afternoon.

Municipal Judge Angela Carpenter set the bond for Antwan Demond Jacobs, 29, 105 Cedar Lane, Jackson, at an initial appearance Friday. She set a $100,000 bond for Jacob’s girlfriend, Xavier Anne Earl, 22, 1001 First East St., who was with him when the shooting occurred.

The two are accused of firing multiple gunshots into a home at 1235 Second North St. According to law enforcement officials, five people, mostly children, occupied the home at the time of the shooting. No one was injured, according to police.

Police have also arrested Marktaus Deangelo Berry, 35, 1000 First East St., in connection with the shooting. He is charged with obstruction of justice for reportedly hiding Earl from police in his apartment. His bond was set at $2,500.

According to reports, the shooting stemmed from an argument involving a bicycle.

Jacobs and Earl believed one of the people in the house had stolen a bicycle and went to the house to confront the alleged thief. When they got to the house, an argument occurred and the couple got into their car, began shooting at the house, and drove off.

Officers later stopped the car the couple was in and took them into custody.