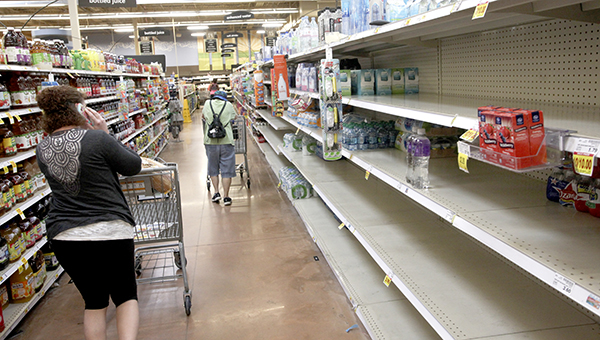 Tropical Storm Barry is expected to become a hurricane before making landfall on the Louisiana Gulf Coast Saturday morning, bringing heavy rain and high winds to the Warren County area as it heads inland.

According to the National Hurricane Center, Barry is strengthening. The center’s 10 a.m. advisory Friday indicated the storm’s winds are 65 mph, and a Hurricane Hunter aircraft flying through the storm has found evidence of further strengthening.

An 11:30 a.m. National Weather Service briefing indicated the Warren County area could expect 4-to-8 inches of rain, with the possibility of 10 inches in isolated areas. The rain is expected to begin Saturday and last through Monday.

“I wouldn’t be a bit surprised if we have to go get somebody out (of flooded areas),” Warren County Emergency Management director John Elfer said.

He said the storm’s outer bands were expected to affect the area Friday night with severe thunderstorms and the potential for tornadoes.

Local city and county agencies are making final preparations for the storm.

Warren County Sheriff Martin Pace said he has a full shift on duty with other shifts on standby. All deputies who are off are also on standby for duty if needed.

“We have deputies deployed in the flooded areas,” Pace said. “The Sheriff’s Office has a boat at Eagle Lake, one at the harbor and two more boats at the county jail.”

Vicksburg-Warren E911 director Shane Garrard said he had four dispatchers on duty starting Friday, with that number increasing to five during the weekend.

North Ward Alderman Michael Mayfield, who is over public works for the city of Vicksburg, said he has been meeting with public works director Garnet Van Norman about storm preparations.

“We have our people out there hitting all the (drainage) hot spots,” Mayfield said Friday, adding storm drain systems were being cleaned out “to give us a better chance of alleviating the worst of it (flash flooding).

“We’re trying to make sure that we do all we can just in case we get a large amount of rain, where we can at least minimize the effect of what might happen. It looks as if we’re going to get a lot of rain here,” Mayfield said.

He said workers were also checking problems in the Kings community, especially in the Hutson Street area, which is prone to flash flooding, and areas on North Washington, where underground box culverts are known to be clogged with silt from runoff.

Up to 10 inches of rain expected from Barry