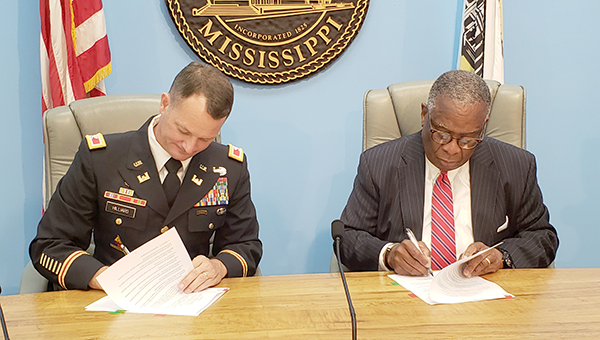 Bids to build an auxiliary water line for Vicksburg are expected to be advertised later this month, following a grant signing ceremony Thursday at the Robert Major Walker building on Walnut Street.

The announcement by Mayor George Flaggs Jr. came Thursday after a grant signing ceremony involving him and Col. Robert A. Hilliard, commander of the U.S. Army Corps of Engineers Vicksburg District.

The signing releases an extra $4.5 million in Water Resources Development Act Section 592 infrastructure program grant money to help cover the cost of the estimated $6 million project. The city’s share of the project cost is $1.5 million.

“This is a great day for the future of Vicksburg,” Flaggs said after the ceremony.

“This is a great beginning, because this was a project I inherited. It’s been a long time coming, and I’m just so grateful that we got this grant. We’re getting ready to go out for construction, and I hope it will come within the money that’s allowed.”

“It’s money to help people and help communities,” he said. “Whether we spend it on a project we construct or we’re helping communities with their infrastructure, that’s fantastic.”

Flaggs said the waterline would start at the city’s water treatment center on Haining Road and go south, running parallel to Washington Street. It will connect to the existing waterline at Washington Street in front of the Jesse L. Brent Lower Mississippi River Museum and Interpretive Center.

He said a crossing valve was installed on the city’s main waterline when repairs were made to the line in 2010, after the line was exposed and damaged during the construction of the museum.

North Ward Alderman Michael Mayfield, who was on the Board of Mayor and Aldermen when the decision was made to build the line, called the lengthy process to be able to go out for bids on project “tedious.”

“We started this process eight or nine years ago, and we started out with a different route, the Fort Hill Route, coming across the Vicksburg National Military Park,” Mayfield said. “We wrestled with that for years, and in due time, we came to find out that not only was that more costly, but it would affect a lot more homeowners, as well as the park itself.”

The new route, he said, is more feasible.

“This line in my opinion is very much needed, because if the main line ruptures, you have very serious problems, not just the immediate downtown area, but you could affect everybody along that line,” Mayfield said, including neighboring water districts that buy water from the city.

“We’re right at the front door getting this project started, and I have no doubt it’s going to make a world of difference if for no other reason you have a backup that would keep the entire city with water in case you have a problem with one of the other lines.

The damage to the main line was the incentive to begin planning the backup line.

In November 2010, the Board of Mayor and Aldermen hired IMS Engineers of Jackson to perform the engineering for the project.

There was little action by city officials on the project after IMS’ hiring until November 2013, when Flaggs called a meeting of IMS representatives, city officials, and Corps and National Military Park officials. By that time, the three-year delay had caused the project’s cost to nearly double.