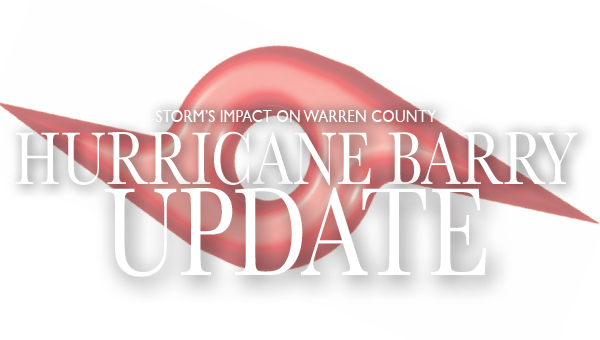 Below is the latest information regarding Hurricane Barry and its impact on Warren County.

5 p.m. Sunday – Gov, Phil Bryant toured the Yazoo Backwater Area Sunday afternoon to get a closer look at the problems at Eagle Lake and the rest of the flooded areas.

Bryant, who had previously toured the area by air, said after his tour “it is still shocking to see the sheer amount of water that we’ve got.

“It’s been here since February, and most of these houses have been under water since May.”

Part of the visit, he said, was to get more information for a Weather Channel program on the flooding here.

“Part of the frustration is no one seems to know the challenges that we have here,” Bryant said, “We’ve got a disaster that’s going on three months here in Warren County and the Backwater.”

“We haven’t seen the rain we thought we were going to get,” Warren County Emergency Management director John Elfer said. “We’ve received about 11/2 to 2 inches,”

He said minor flooding was reported along North Washington Street and two trees were reported down, one on Halls Ferry Road and one on Mississippi 3.

Entergy Mississippi customer service representative Shelia McKinnis said 76 outages were reported across the county. All were expected to be restored Sunday night.

The area remains under a flash food watch until 7 a.m. Monday.

“It’s just a slow, steady rain,” said Warren County Emergency Management director John Elfer, “So far, we have had no flooding or other problems, although it’s possible we may get a feeder band later.”

8:45 p.m., Saturday  – While Warren County missed the heavy rains that affected the Mississippi and Louisiana coasts when Hurricane Barry made landfall Saturday morning, it could still be affected by rain and wind Sunday.

“If we get any rain, it will be late tonight or early Sunday and continue through Sunday,” he said.

According to graphics on the National Hurricane Center’s website, Warren County is expected to get 6 to 10 inches of rain and the potential for flash flooding, and 5 to 10 mph winds.

“We have rain, but not a lot,” said Warren County Emergency Management Agency director John Elfer. “They keep moving this thing (Barry) to the west, so if we get anything it will be tonight and Sunday.

“I don’t want people to get a false sense of security; we could still get some severe weather from this.”

The only problem reported was a brief power outage about 12:45 p.m. affecting about 180 people in the North Washington Street area.

Entergy customer relations representative Shelia McKinnis said the outage was repaired. The cause was not determined.

1 p.m., Saturday — The National Hurricane Center has announced that Hurricane Barry made landfall as a hurricane in Louisiana near Intracostal City and then weakened to a tropical storm. It is now packing sustained winds at 70 mph. It is currently moving northwest at 6 mph.

Noon, Saturday — As Barry slowly moves to landfall, Warren County Sheriff Martin Pace said he and other county agencies are ready to respond. “We have no days off,” Warren County Sheriff Martin Pace. “I have full patrol shift on duty. And and our off-duty shifts are on stand-by; so is the night shift.” Martin said the major threat from the storm won’t be felt in Warren County until later in the evening Saturday and into Sunday. “This is not going to be a short-lived event,” he said. “It’s going to last awhile. This system is moving very slowly. Pace said his office has already had a boat patrolling the area around Eagle Lake since March, and that there are two other boats staged in Vicksburg ready to help respond to water rescues if needed. “The county also has staged equipment throughout the county to help with any downed trees or handle any mudslides,” he said. “We have all been preparing for the worst and hoping for the best.” Also, Hawkins United Methodist Church has been placed on standby as a shelter for local flooding if it is determined there is a need. If that happens. and if you would like to volunteer to staff the shelter, contact Richard VanDenAkker at 601-831-1385.

11:00 a.m., Saturday — Warren County Emergency Management Director John Elfer said the biggest impact to Warren County won’t be felt until Sunday morning. That said, some of the rain bands from Hurricane Barry would make their way through the county late Saturday afternoon and evening as the storm makes its way onshore and moves inland. “We have been moved into the area that shows a significant threat for flash flooding,” Efler said, saying that threat projected rain totals 6-to-12 inches. “We might have areas that see less, and there’s a chance some areas will see more. It’s just a moving target. The problem with this storm is it is not very well organized.” Elfer said his biggest concern is the flash flooding tied to this storm, particular areas such as Paxton Road, Old 27, Skyfarm, Halls Ferry near Grange Hall and inside the old Brunswick Levee near Eagle Lake. “Inside the levee, like Sea Island Drive, Peacanwood and Road Runner,” he said. “That’s an area where flash flooding is a concern.” As for areas that continue to be flooded by months of high water along the Mississippi River and Yazoo Backwater area, “this event is just going to make those areas worse.”

10:00 a.m., Saturday — The National Hurricane Center has officially declared Barry a hurricane. The storm, which is still 40 miles from the Louisiana coast, is now packing sustained winds of 75 mph. Forecast still calls for Warren County to receive between 6-to-10 inches of rain from this storm.