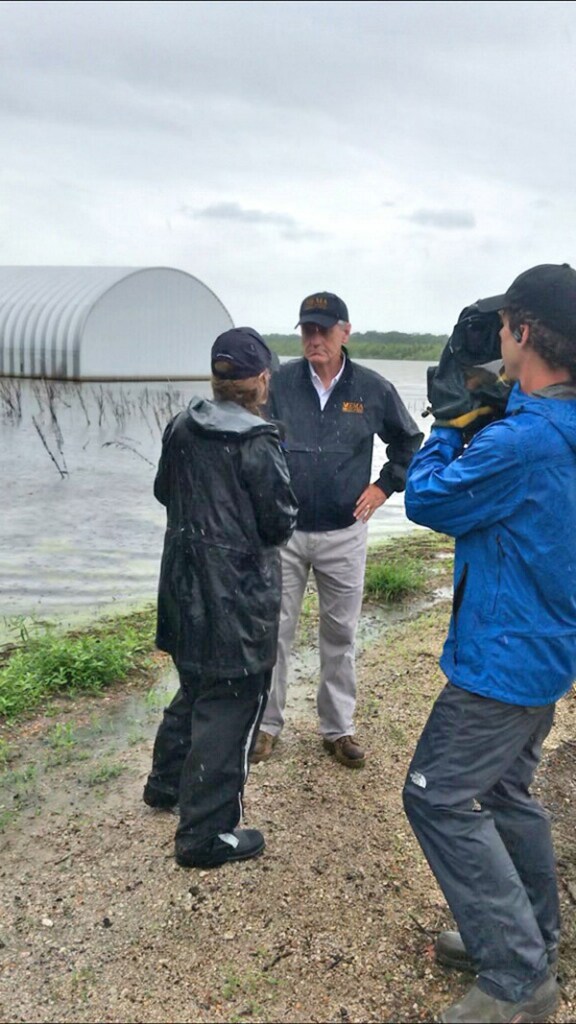 Gov. Phil Bryant believes the U.S. Army Corps of Engineers has sufficient information to convince the Environmental Protection Agency to lift its 2008 veto prohibiting the installation of pumps on the Steele Bayou Control Structure.

“I think we’re very close,” Bryant said Sunday after touring the Eagle Lake area and talking to reporters from The Weather Channel.

The pumps were expected to move 14,000 cubic feet of water per second from the land or Delta side of the structure to the riverside if and when gates were closed due to high river stages.

Designs had it protecting about 630,000 acres in the South Delta from flooding. Flooding to residential and nonresidential structures in the Delta would be reduced by 68 percent when the pump station is completed, according to a report from the Corps.

The EPA took into account multiple revisions in the plan in its veto, but concluded the project would adversely affect area wetlands and wildlife.

“They (the Division) have provided specific information to the Corps about what would occur once the pumps are in, that it would not damage or destroy any wetlands,” he said.

“Rain causes wetlands, not this flooding. We have undeniable evidence that there will not be any environmental damage by pumping the water out.”

Bryant said flooding in Warren County and the Yazoo Backwater area has been overlooked by the nation.

“Part of the frustration is no one seems to know the challenges that we have here,” Bryant said. “We’ve got a disaster that is now going on three months here in Warren County and through out the Yazoo Backwater.

“I am trying to get everyone from FEMA to EPA to the Corps of Engineers to understand the severity of the problem that exists here in Warren County and all of the Yazoo Backwater.”

He said he has been to Washington several times, meeting with R.L. James who heads the Corps of Engineers, and talking with Kaiser about the flooding.

“It always comes back to the pumps,” he said. “Every other area along the Levee system of the Mississippi and Yazoo rivers has pumps except this particular area.

“We’ve got to work with the EPA to get them to revisit their 2008 veto and install these pumps in the backwater to get this water out. It’s the only opportunity to do it,” Bryant said.

The environmental damage at Eagle Lake and the Backwater area, he said, is being done “by the fact that we cannot get this water out. It’s just the bureaucracy, quite honestly, of Washington, and trying to get the EPA to do something they’ve never done, reverse a ruling on a veto.

“I just saw part of the 550,000 acres that’s underwater that should be growing crops, the deer standing along the edge of the woods; the trees probably will not survive being in water three or five months.”

Bryant called seeing the extent of the flooding “shocking; if you look over and beyond as you drive the highway, there’s just miles and miles of water. Trying to get that concept in your mind, one-half million acres under water,” he said.

And outside of the state’s congressional delegation, “Very few people on the national level have been paying attention to it.”