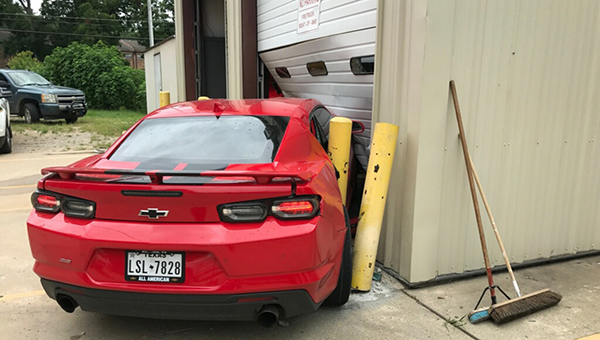 A 2019 Camaro sits in front of the Culkin Fire Station after it crashed into the station’s door on Saturday. A 15-year-old driver was behind the wheel, and 27-year-old Billy Joe Hayes is facing charges in connection with the wreck. (Submitted to The Vicksburg Post)

A Vicksburg man is out on bond after a wreck that damaged the bay door of the Culkin Fire Station on Freetown Road.

Warren County Sheriff Martin Pace said Billy Joe Hayes was arrested on charges of allowing an unauthorized person to drive a vehicle and misdemeanor child endangerment after the Saturday wreck.

Pace said Monday that no date has been set for an initial appearance for Hayes in Warren County Justice Court.

Hayes is accused of allowing an unlicensed 15-year-old to drive a 2019 Camaro that he said he borrowed from a friend.

The wreck occurred about 12:45 p.m. Neither Hayes, the teen, nor Hayes’ 3-year-old child, who was seated in the car’s rear seat, were injured.

According to reports, the teen attempted to drive off from a stop sign at a high rate of speed.

The teen reportedly lost control, went through the fire station parking lot sideways, and hit and damaged the door. A fire truck was also slightly damaged and the Camaro was heavily damaged. Assistant Culkin Fire Chief Bobby Rufus said the crash damaged the fire truck’s bumper, but the truck is operational.

Pace said Culkin firefighters were at the station at the time of the wreck. Sheriff’s deputy Eric Procter was at a nearby apartment complex when he heard squealing tires and the sound of the crash.

Pace said representatives from the company that installed the door were also at the station and removed the door.