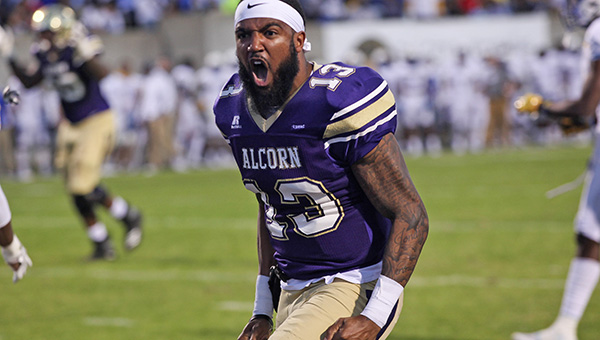 Alcorn State quarterback Noah Johnson (13) celebrates after scoring a touchdown during the 2018 SWAC championship game. On Tuesday, Johnson was selected as the preseason SWAC Offensive Player of the Year and Alcorn was picked to win the SWAC’s East Division in voting by the league’s coaches. (Courtland Wells/The Vicksburg Post)

BIRMINGHAM, Ala. — Alcorn State is still the beast in the East.

The five-time defending Southwestern Athletic Conference East Division champions were projected to win it again in the 2019 SWAC preseason poll.

The Braves earned a whopping 14 selections on the preseason All-SWAC teams, including nine on the first team.

The announcements were made Tuesday at the 2019 SWAC Football Media Day in Birmingham.
Southern University was picked to win the West Division. Jackson State was picked to finish third, and Mississippi Valley State fifth, in the East. 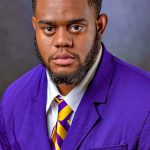 Johnson, from Tampa, Florida, is a third-team preseason FCS All-America selection. He was the 2018 SWAC Offensive Player of the Year and SWAC championship game Offensive MVP.

Muhammad is coming off a big year in 2018, when he was an HBCU All-American and an All-SWAC first team selection.

Muhammad finished second on the team in tackles, with 64, despite missing two games. He also had four sacks and nine tackles for loss. Muhammad helped Alcorn lead the nation in sacks per game.
Jackson State had two players selected to the preseason All-SWAC team, both on defense. Defensive lineman Khalil Johnson and linebacker Keonte Hampton were both picked.

Johnson had 40 total tackles last season, including 10 for loss and three sacks. Hampton, a sophomore, led the Tigers with 83 tackles including 10.5 for loss.