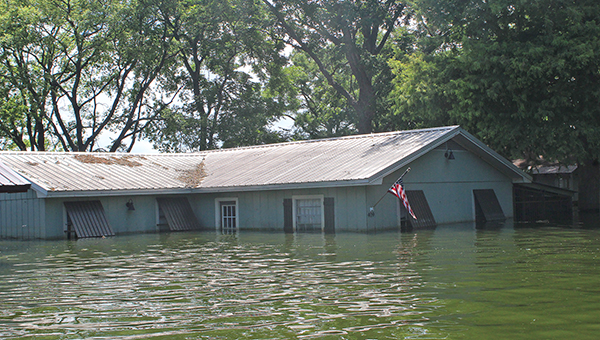 A house at Eagle Lake stands more than halfway underwater on July 3. The residents of Eagle Lake will hold a meeting on Tuesday at the Warren County Courthouse to discuss plans for the area’s recovery. (Catherine Hadaway/The Vicksburg Post)

Residents of Eagle Lake and other areas affected by the Yazoo River Backwater Area flood will meet with state and local officials at the Warren County Courthouse July 23 to discuss the flooding.

The meeting is at 5:30 p.m. in the circuit courtroom on the second floor of the courthouse.

“This is not going to be a ‘bashing party;’ this is for current information and going forward,” said Linda Banchetti, president of the Eagle Lake Matters Association. “Our whole agenda is what’s happening now, and what’s going to be the steps to recovery.”

Banchetti said representatives with the United Way of West Central Mississippi’s long-term recovery committee have been invited to provide information to the residents about recovery.

Eagle Lake residents were forced to leave their homes in early March when water from the Yazoo Backwater Area began overtopping streets in the community and getting into homes. The extreme flooding forced the Warren County Board of Supervisors on March 8 to issue a mandatory evacuation of the community.

“I’m more interested in what they (officials) can tell us about Eagle Lake,” she said. “I’m trying to focus on us. People are upset; they want to know what’s going on.”

Banchetti said Eagle Lake’s annual Lakefest has been postponed until 2020. The event was initially planned for May and then moved to August because of the flood.

She said a Save Historic Eagle Lake Recovery Fund has been established at River Hills Bank to raise money for the recovery efforts after the water recedes from the Eagle Lake Community. The fund will be audited by a certified public accountant.

Donations can be made to the Save Historic Eagle Lake Recovery Fund through any River Hills Bank location. Donations can also be made online by going to eaglelakematters.com and clicking on the “Donate” button.

“The support for our community by the general public has been overwhelming, and that is an understatement,” Banchetti said. “Eagle Lake was saved by its residents, property owners and volunteers.”