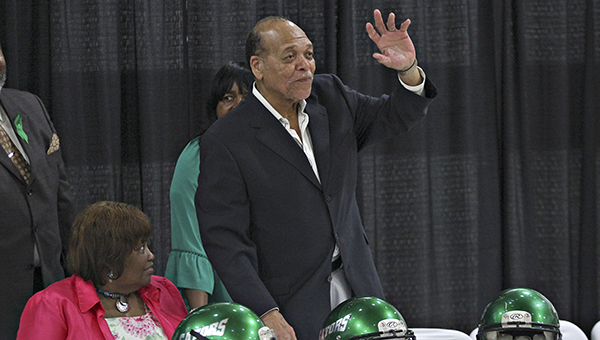 Temple High School, North Vicksburg and Vicksburg High football coach, Houston Markham Jr. waves to attendees at a banquet honoring him in 2017. Markham died Wednesday, in Montgomery, Ala., at the age of 75 following an illness. (Courtland Wells/The Vicksburg Post)

MONTGOMERY, Ala. — Houston Markham, Jr., the football coach who helped turn Vicksburg’s Rosa A. Temple into a state power in the 1960s before becoming a legend in the Southwestern Athletic Conference, died Wednesday. He was 75.

Alonzo Stevens, a member of the Vicksburg Warren School District Board of Trustees who played and coached with Markham at Vicksburg High School and Alcorn State, said Markham died after an illness.
Markham, a Brookhaven native, played football at Alcorn State and came to Vicksburg in 1966 as an assistant coach at Temple, the city’s black high school during the era of segregation.

He became the head coach in 1967 and quickly became one of the most successful coaches in Warren County history.

Markham won three consecutive Black Big 8 championships at Temple before it closed in 1971, guided North Vicksburg for two seasons during the brief two-year integration period, and then led the combined Vicksburg High School to the Big 8 championship in 1973 in its first year of existence.

Before the Mississippi High School Activities Association adopted its playoff system in 1981, the Big 8 championship was the equivalent of winning the current Class 5A or 6A title.

After losing his first two games as Temple’s head coach in 1967, Markham didn’t lose again at the school. The Buccaneers’ victory over New Orleans power St. Augustine in the 1970 Red Carpet Bowl capped a 39-game unbeaten streak in their final football game. Temple won 37 times and tied twice after those two losses.

“We lost the first couple of games and (principal Jim Stirgus, Sr.) said we’re going to have to get rid of you if you don’t shape up. We won the next 40,” Markham recalled with a laugh during a 2017 interview.

Markham compiled a record of 63-16-3 during his decade with Vicksburg’s teams. His win total is tied for sixth all-time among the county’s coaches, and his .783 winning percentage ranks third among those who coached at least 50 games.

The city honored him in June 2017 with Houston Markham, Jr. Day, which included a parade and ceremony at Memorial Stadium.

Markham left Vicksburg in 1975 to embark on a successful college coaching career. He spent 12 seasons as an assistant coach at Jackson State, helping the Tigers win three consecutive SWAC championships, and then was hired as the head coach at Alabama State in 1987.

At Alabama State, Markham compiled a 68-39-5 record in 11 seasons. His 1991 team went 11-0-1, won the SWAC and Black College Football National championships, and is regarded as the best team in school history. His 68 wins are the most by any Alabama State coach, and the school’s football office and training complex bears his name.

Markham is a member of the Alcorn State, Jackson State and Alabama State halls of fame. He was also inducted into the Vicksburg Warren School District Athletic Hall of Fame in 2018.

“The Houston Markham, Jr. Football Complex is a lasting tribute to a man who was a true Hornet legend. I considered him to be a personal friend and mentor,” Alabama State University president Dr. Quinton T. Ross, Jr., said in a statement. “I first knew him when I was a student at ASU. His son was one of my classmates, and the Markhams and I attended the same church. Coach Markham was a great advisor, who shared his wisdom and life experiences freely and lovingly with students both on and off the field. He will be greatly missed as a prominent member of this community and as a committed supporter of ASU and ASU athletics. We ask that fans and the general public keep the Markham family in their thoughts and prayers.”