Organ donation a cause close to Hyer’s heart 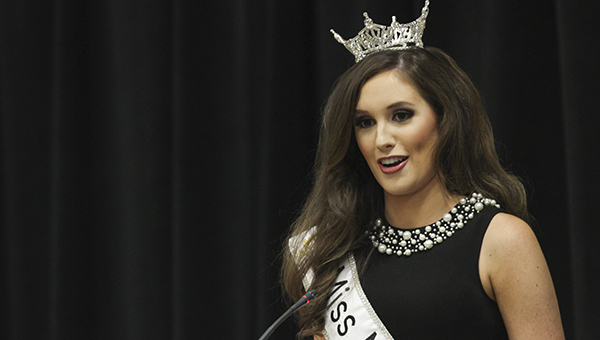 For Miss Mississippi 2019 Mary Margaret Hyer, her reign is about being true to herself and raising awareness about the need for organ donation.

On Wednesday afternoon, Hyer joined the Vicksburg-Warren County Chamber of Commerce as the speaker for its monthly meeting. Hyer shared details about her journey to earning the crown and her social impact initiative, “Advocate, Celebrate, Donate: Decreasing the Donor Organ Deficit.”

The Hattiesburg native grew up watching the Miss Mississippi and Miss America competitions on television with her family, but never attended one in person until her younger sister was asked to be a Magnolia Princess.

“I never thought that it could be, but she saw something in me that I never saw in myself, and a seed was planted in my heart,” Hyer said.

“I did exactly the opposite of what all my pageant coaches told me and I was just myself,” she said.

Fortunately, Hyer’s mother made a living donation that gave her grandmother the organ she needed. Her grandmother’s experience gave Hyer a first-hand look into the harsh realities of the organ donor deficit.

“People don’t think about (the organ donor deficit) until it becomes relevant in their lives,” Hyer said. “Every 10 minutes, someone is added to the list. Twenty people die every day waiting for a transplant that never comes.”

Hyer focuses on raising awareness about the donor deficit and getting people to talk about the need to register as organ donors. She ended the presentation by encouraging those in the room to register themselves.

“We are not talking about this enough, and I will be talking about it every chance I get,” Hyer said. “I am begging you to register.”

Anyone who is 18 years or older can register to be an organ donor. Registration can be filled out at the Vicksburg DPS Driver’s License Office at 1100 Grove St., Suite C, or online at organdonor.gov. Those who are under 18 years of age can register with parental consent.