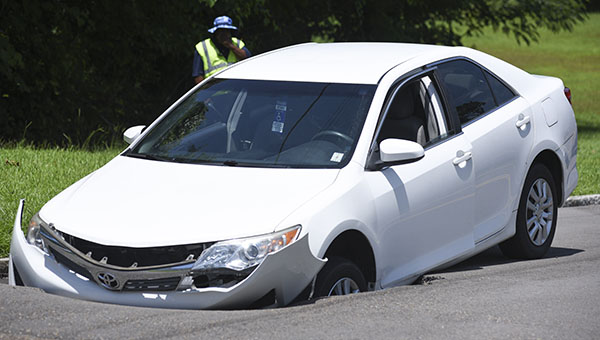 A vehicle is seen stuck in a hole that opened as the vehicle traveled over the area near the intersection of Farmer and Mundy Street at 1 p.m. Thursday. No injuries were reported. The sinkhole was caused by a broken water line. (Courtland Wells/The Vicksburg Post)

A leaking 6-inch water line caused the collapse of a section of pavement at Farmer and Mundy streets Thursday, damaging a car when the street fell in.

Vicksburg police officer Judson Magloire said Joann Roberts, 63, was preparing to turn right on Mundy Street when the pavement at the intersection collapsed. The collapsing street pulled the front end of the car into the resulting hole. He said Roberts and her daughter, a passenger in the car, had minor injuries.

The wreck occurred just before 1 p.m.

North Ward Alderman Michael Mayfield said the section of Farmer Street where the paving collapsed was resurfaced about four months ago.

“That was an area where we had to do lot of work (before paving),” Mayfield said.

Water and gas superintendent Dane Lovell said a 1-inch valve on the water line, which leads to a fire hydrant, was leaking under the pavement.

“From there, over time, it evidently caused a void,” Lovell said. “We had been running dump trucks over there getting dirt and it never gave way.”

Lovell said the valve was shut off and water main department crews were expected to complete repairs Friday. No interruption to water service in the area was expected.

Because the leak was underground, Mayfield said, it went undetected until the collapse.

Mayor George Flaggs Jr. expressed concern for Roberts. She was not transported to the hospital immediately after the wreck, and any injuries were believed to be minor.

“These things can happen, and we do everything we can to detect them,” Flaggs said. “This could not have been detected. I don’t think it could have been avoided. I hope the people in the car are OK. I want to remind people if they see things to call us.”