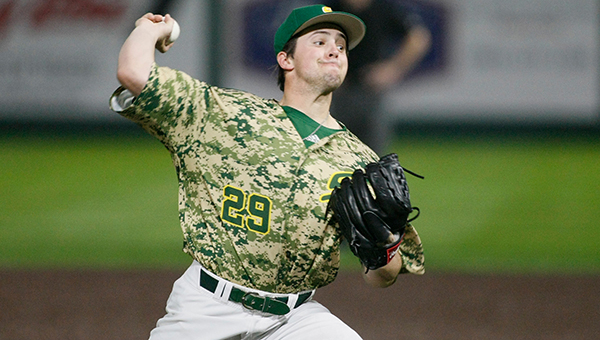 While he was rehabbing from an arm injury this season, Carlisle Koestler became aware of a very important fact.

He had pitched in four games for Southeastern Louisiana in 2019. If he got to five, his final year of college eligibility would be used up and his baseball career likely finished.

Koestler instead shut it down for the rest of the season and got a fresh start in a couple of ways. He appealed to the NCAA for a sixth year of eligibility and had it granted, then took advantage of another rule to change venues.

The former Warren Central star is planning to transfer to Mississippi State and play for the Bulldogs next season after going through the NCAA’s transfer portal.

“It’s awesome. Last year I was down on myself, and you watch your teammates play and you want to be out there with them,” Koestler said. “To be able to have one more year, at least, is a really positive thing.”

At this point, Koestler has only committed to Mississippi State and not officially transferred. He has graduated from Southeastern Louisiana University with a degree in exercise science, but said he has yet to be admitted to graduate school at Mississippi State. The final step is expected to be formalized soon.

After putting his name in the transfer portal, Koestler said he also had offers from Tulane, Texas Tech, Louisiana Tech and San Diego. Staying close to home wasn’t a primary factor in his decision, he said.

“I would have gone anywhere. It’s not as much as if I was 18 or 19,” said Koestler, who is 23 years old. “It was academics. I was going to have to get into a master’s program and was looking for more options than Southeastern had.”

On the baseball side of things, playing for a top-flight program like Mississippi State isn’t a bad option, either. The Bulldogs have reached the College World Series each of the past two seasons and have a need for pitchers after weekend starters Ethan Small and Peyton Plumlee left the program. Plumlee graduated and Small was a first-round draft pick by the Milwaukee Brewers.

A couple of the Bulldogs’ top relievers, Cole Gordon and Jared Liebelt, are also gone.

“I’ve only got one year left, so it was a positive that I was stepping into a team that’s already pretty good,” Koestler said. “They lost pretty much all of their starters and relievers. It’s all going to depend on how I do in the fall, how they’ll use me.”

Koestler has already proven he can step in and be an outstanding pitcher.

After winning The Vicksburg Post’s Warren County Player of the Year award in 2014, he was an MACJC All-State selection at Hinds Community College as a redshirt freshman in 2016. He started 13 games for Southeastern Louisiana the following season, and then earned All-Southland Conference honors in 2018.

Koestler was 7-1 and led the Lions with a 2.68 ERA in 87 2/3 innings pitched in 2018. That was also when he said he started having pain in his arm that ultimately cost him most of the 2019 season.
Koestler was diagnosed with bone spurs in his arm and only pitched in four games, the last a six-inning outing against Central Arkansas on March 9.

“It was bothering me the year before and I threw through it. It got to the point I couldn’t throw at all,” Koestler said.

While resting and rehabbing, it was discovered that he was close to passing the threshold to be eligible for a medical hardship waiver from the NCAA. Another appearance would have pushed him over, so he decided to shut it down and seek an extra season. He got it, and now will spend it at his third different college in a career that suddenly seems both rejuvenated and ancient at the same time.

Koestler said his longevity has simply made him the wise old man in the locker room.

“I’ve been in college for a while,” Koestler said with a laugh. “It seems like I’ve been in each place forever. Each one helps you prepare for the next place. Every one has taught me something. It’s a positive that I’ve been all these places. It helps me shed light on the failures and successes that I’ve had.”

Reading about cricket is a language all its own