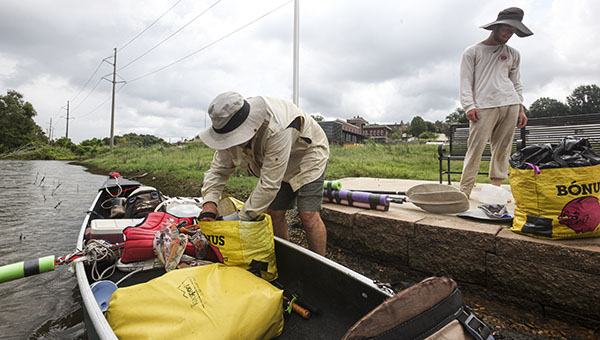 Daniel and Jackson Shain load their canoe from the banks of the Vicksburg riverfront, after staying in Vicksburg over the weekend, to continue their trip down the Mississippi River Tuesday. The Shains started their journey in Kentucky Lake three weeks ago and will take the Mississippi River to the Atchafalaya River and Morgan City where they'll end their journey in the Gulf of Mexico. (Courtland Wells/The Vicksburg Post)

Because of the flooding along the Mississippi River and recent Hurricane Barry, tourists have been inquiring whether Vicksburg has been affected to the point they should cancel their plans to visit.

Visitors as well as industry partners, Vicksburg Convention and Visitors Bureau executive director Laura Beth Strickland said, have made calls with concerns regarding flooding in Vicksburg and Warren County. Her answer, with the aid of travel counselors, is always the same.

“We are open for business,” Strickland said.

Tom Pharr, who is the owner of the Anchuca Historic Mansion, said this happens every time there is a major flood along the Mississippi River. Given the geography of the city, it’s an odd question. When areas around Vicksburg flood, the city itself remains high and dry because it sits on a bluff high above the river.

“I have always thought it was very odd that people would perceive the city of Vicksburg would be affected by a flood,” Pharr said. “We were called the Gibraltar, the Hill City. Vicksburg was a great refuge during the flood of ’27 when people were in camps along the hills of Vicksburg. Our history tells us the historic city of Vicksburg doesn’t flood, so I don’t know what people are thinking when they hear Vicksburg is flooded. We are almost 300 feet about sea level. If I’m flooded, Texas is underwater.”

However, due to media attention — local, state and national — Pharr guessed if people hear Vicksburg is flooded enough times, they will assume roads to and from and everything in the city are underwater.

During the 2011 Mississippi River flood, NBC’s weather anchor Al Roker stood on Levee Street near the Old Depot Museum in shin-deep water, giving the impression the whole town of Vicksburg was flooded.

“We had groups and individuals cancel that year,” said Lynn Foley, executive director of sales and marketing of Southern Hospitality Services, LLC.

Fortunately, this year has been different.

Foley said she has had no cancellations due to the recent passage of Hurricane Barry, nor the high waters along the Mississippi River and its tributaries.

“I just don’t think we have had the national media attention like in 2011,” she said, when the flood stages at Vicksburg set new records. This year’s flood has been long-lasting but peaked about seven feet lower than eight years ago.

And while the historic backwater flooding has been devastating and affected many, Foley said, those areas are not on the tourist routes.

All attractions in Vicksburg including hotels, bed and breakfasts, restaurants and casinos are open, Strickland said. The Vicksburg National Military Park was closed Monday because of the threat of heavy rain and severe weather from Barry, but reopened on Tuesday.

“The only time we (Vicksburg) shut down is when the government shuts down,” Pharr said.