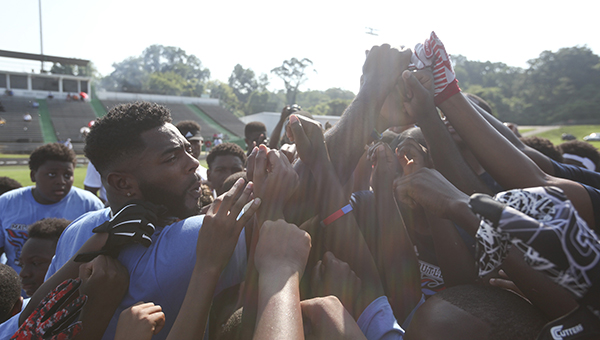 As it enters its fifth year, the Malcolm Butler Football Camp is moving to a new venue but is still going strong as ever.

This year’s free camp, which is hosted by Tennessee Titans cornerback and former Vicksburg High star Malcolm Butler, is set for Saturday morning at Sports Force Parks on the Mississippi. Nearly 500 children ages 6-16 — the most organizers can handle — signed up during the registration period this spring, and more than a dozen local businesses have stepped up as major sponsors.

“It’s all about the kids. As the year has come along, everybody is expecting it and is looking forward to it,” camp director Cynthia Bell said. “We want to keep it going like this 20 years from now.”

While everyone involved wants to keep the enthusiasm high for years to come, this year’s camp will be in a new location. Because of construction at Vicksburg High’s Memorial Stadium, the site of the camp its first four years, Saturday’s edition will be at Sports Force Parks.

Bell said the new sports complex on Fisher Ferry Road offers some advantages over Vicksburg High, such as better parking, but she wasn’t sure if the move would be permanent or simply a one-year necessity. The current phase of construction at Memorial Stadium is expected to be completed by mid-September, but more work is planned for 2020.

“It’s actually a little better because a lot of fields are going to turf and it gives them a feel for it. That’s what we want, is to get them acclimated to it,” Bell said. “We want to see how it goes. If it’s a better fit getting everybody at one central location, then we might look at that. Sports Force has really welcomed us with open arms. I can’t say enough about them. They really want us out there.”

With the new venue come some new rules, Bell said. The fields at Sports Force Parks are artificial turf, so all participants must wear gym or turf shoes. No cleats will be allowed.

Parents watching their children are welcome to bring lawn chairs and tents, she added. Water and food will be available to camp participants, and concession stands will be open for parents.
For $10, players can also take pictures with Butler and other pro football players who are in attendance as instructors.

“All of that money goes to pay for the camp. We don’t keep any of it,” Bell said.
The camp begins at 8 a.m. and continues until noon. Bell said participants should arrive early for check-in. No walk-up registration is available.

Two camps will run simultaneously. The Malcolm & Me Camp is for children in grades 1-6, and the Malcolm Butler Football Camp is for players in grades 7-12. Both will be at Rowdy Nosser Field at Sports Force Parks.

“Everybody needs to show up at Sports Force Parks at 7:30 a.m. when the gates open, and they’ll be sent to their grade lines,” Bell said.