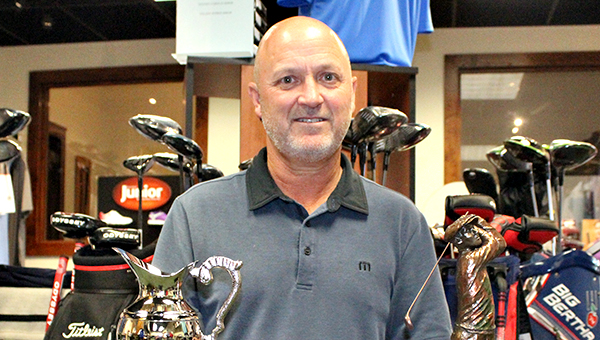 Jeff Harpole won the Vicksburg Country Club Golf Championship on Sunday, with a three-round total of 213. It’s the second year in a row, and third time in four years, that he has won the tournament. (File/The Vicksburg Post)

The reigning king of golf in Warren County showed he’s not ready to let go of his grip on the title.
Jeff Harpole shot a three-round total of 213 and cruised to his second consecutive victory in the Vicksburg Country Club Championship on Sunday.

Harpole opened with back-to-back rounds of 69 on Friday and Saturday to take an eight-shot lead into the final round. Although he opened the door with a modest 75 on Sunday, his challengers were either unable to mount a charge or too far back to threaten him.

Boolos shot a 68 on Saturday and 70 on Sunday, but couldn’t overcome the 80 he posted in the first round. Dornbusch was steady, but had a 76 on Saturday sandwiched around rounds of 71 and 72.
Waring shot a 76 on Sunday, and Bell an 81. Boland was in second place heading into the final round, but shot 80 and slipped back to fifth.

That left Harpole all alone at the top, and able to breathe easy as he tries to achieve another sweep of Warren County’s major local golf tournaments.

He’ll have a quick turnaround for the second leg of this year’s triple crown. The 2019 Warren County Championship begins Saturday morning at Clear Creek Golf Course.

The entry fee for the Warren County Championship is $110. Players must be 16 or older, but do not need to be a county resident. There are separate divisions for women and seniors in the 36-hole tournament, and the entry fee includes cart, green fee, lunch and beverages each day.

A shootout for the top 12 players from last year’s County Championship will also be played on Friday, July 26, at 5 p.m. The entry fee is $20 per person and prizes will be awarded to the top four places.
To sign up for any of the tournaments, visit the Clear Creek clubhouse or call 601-638-9395.