Butler gives back, enjoys time at home with football camp 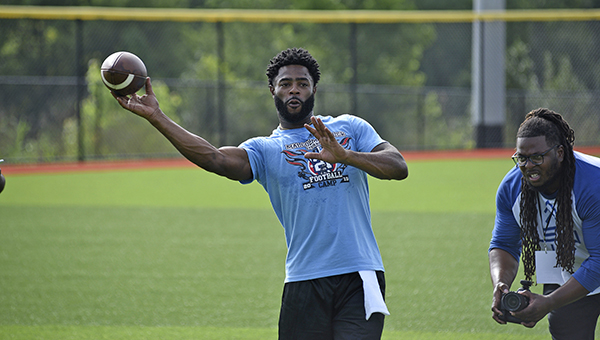 Malcolm Butler throws a pass to a camper during the 5th Annual Malcolm Butler Football Camp at Sports Force Parks on The Mississippi on Saturday. (Courtland Wells/The Vicksburg Post)

Malcolm Butler floated from group to group at his annual football camp on Saturday, putting in face time with the aspiring players who were once like him. On his way he took a minute to keep tabs on his son, Malcolm, Jr., and chat with friends and well wishers along the perimeter of the field.

The Fifth Annual Malcolm Butler Football Camp was as much a homecoming celebration as it was an instructional camp, both a chance for Vicksburg’s young players to learn about the game and for its resident NFL star to give back to the city he calls home.

“This is the fifth one, this is my fifth year in the NFL, and it seems like yesterday I did my first camp. It’s always great to give back,” said Butler, who is heading into his second season as a cornerback with the Tennessee Titans after spending four with the New England Patriots. “When I was a younger child I always wanted to meet an NFL or NBA player and never had the opportunity to. With my hard work and dedication, I’m able to provide that to the city of Vicksburg and the youth. I’m going to keep representing the best I can.”

This year’s camp was held at Sports Force Parks on the Mississippi, rather than its traditional home of Vicksburg High, because of construction at VHS’ Memorial Stadium. The atmosphere was loose and relaxed, with groups of 25-30 players rotating through various drill stations for about two hours before wrapping up with one final period of 7-on-7 games.

Coaches from Vicksburg High and Warren Central, as well as former players from Alcorn State, Jackson State and Butler’s alma mater West Alabama served as instructors. Butler himself bounced between groups, trying to visit everyone as much as he could and impart some life as well as football lessons along the way.

“I just tell them we’re from the same area. I grew up just like they did, in the city of Vicksburg. I went to Warren Central and Vicksburg High School. I stayed in multiple spots around Vicksburg, Mississippi. I did some good things and I did some bad things,” Butler said. “But if you really want to get your act together and do something with yourself, you don’t have to play football but you’ve always got to have a Plan B because football will break your heart. You can do anything you want to do, as long as you’ve got that mindset and put yourself around positive people.”

Butler’s sixth season in the NFL, and second with the Titans, will begin Thursday when the team’s veterans report for training camp in Nashville.

Butler is a made man in the NFL at this point, a five-year veteran, two-time Super Bowl winner and one-time Pro Bowl selection. He said he’s still looking at this as a critical season in his career, however.

Butler signed a five-year, $61 million free agent contract with the Titans last summer, after spending the first four years of his career with the Patriots.

He ranked second on the Titans with three interceptions, and also had 69 tackles, but struggled at times. According to Pro Football Focus he ranked ninth in the NFL in receptions allowed, with 58, and allowed more than 100 receiving yards three times in the first nine games of the season. In four years in New England, he had never allowed more than 100 yards twice in any season.

In the last seven games, however, Butler’s performance was much better. According to PFF, which tracks advanced stats, Butler had the third-lowest passer rating allowed (40.4) among all NFL cornerbacks in Weeks 10-17. Half of his team-high 12 pass defenses came in the last five games, and he also scored the first touchdown of his career on a winding, 56-yard interception return on the final play of a 25-16 victory over the Washington Redskins in Week 16.

Butler admitted that last year’s tumultuous offseason affected his play. He left New England after being benched for Super Bowl LII — an NFL mystery that might never be solved — and got his first big contract from the Titans. With a less eventful lead-up to the 2019 season, he said he’s looking to carry the momentum from the back half of 2018 forward.

“I was coming off a rollercoaster,” Butler said. “Coming from New England and all of the noise, and getting the big contract, it was a whole lot. It was a fresh start, but it wasn’t fresh. This is a fresh start.”

And, of course, the unofficial start to his fresh start is where it all started, in Vicksburg. He said he always enjoys coming back, and giving back, to the town and people who have helped him along the way.

“I could go anywhere in the world, but when I come to Vicksburg there’s no better feeling,” Butler said. “I’m always appreciative of the support around here and all the fans and everything that comes my way when I come home. I’m always thankful for that.”