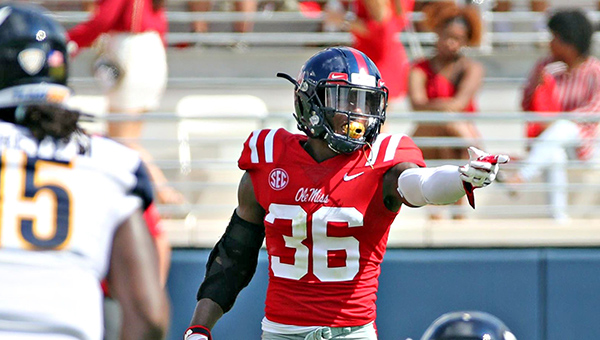 Defensive back Zedrick Woods points out a receiver to his teammates while playing for Ole Miss last season. Woods signed with the NFL’s Jacksonville Jaguars as an undrafted free agent, but announced Tuesday that he planned to retire instead. (Ole Miss Athletics)

The Jaguars made the announcement Monday after rookies arrived at the facility. Woods was placed on the team’s reserve/retired list.

Woods’ agent, Ron Butler, said his client has been dealing with a turf toe injury that prompted the decision.

″I’m assuming he must have not been in a great place mentally in terms of the injury and decided this would be the best for him, his career and future,″ Butler told Jacksonville.com. ″He definitely has a foot injury, turf toe. I got a phone call from him after he did some soul searching on the whole thing. He loves football and I know he loved the opportunity that presented itself with the Jaguars. But whatever it was, it wasn’t enough to keep him playing.″

Woods had a decent shot at making Jacksonville’s roster, especially since the team’s safety position is considered one of its thinnest. The group includes inexperienced starters Ronnie Harrison and Jarrod Wilson as well as veteran backup Cody Davis.

Three more undrafted players — C.J. Reavis, Andrew Wingard and Joshua Moon — would have been vying with Woods for the final spot on the 53-man roster.

Woods ran the fastest 40-yard dash time, 4.29 seconds, at this year’s NFL scouting combine. He started in 37 games during his college career at Ole Miss, played in 49, and had six interceptions.