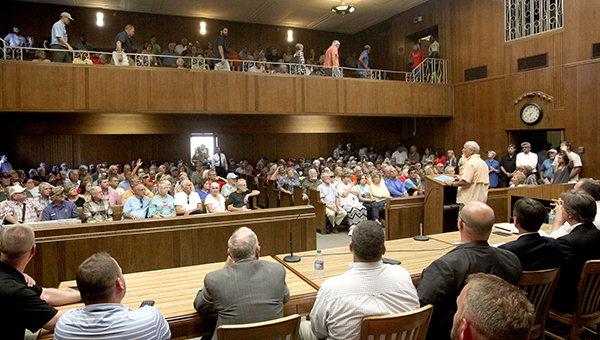 Residents affected by the Yazoo Backwater Area flooding gather in the Warren County Courthouse for a meeting addressing the flooding Tuesday. (Courtland Wells | The Vicksburg Post)

Floodwaters could be gone from the Eagle Lake community by the second week in August, the water management chief for the U.S. Army Corps of Engineers Vicksburg District said Tuesday.

“We’re looking at getting the lake back into bank at about 94 (feet),” Drew Smith, chief of the Water Management Section for the U.S. Army Corps of Engineers Vicksburg District, said. “At least the majority of the houses at 94 should have everything dry.” He added the lake could be back to 75 feet in October.

Smith’s comments came during a Tuesday evening meeting of Eagle Lake and other residents affected by flooding in the Yazoo Backwater Area. The meeting was held at the Warren County Courthouse and drew a standing room only crowd that filled the benches on the floor and the balcony of the circuit courtroom.

Linda Banchetti, president of the Eagle Lake Matters Association, and her husband Paul, called the meeting to provide information about the flooding and look at the recovery process.

Besides the present flood levels, local and state officials discussed the situation with roads in the area, and touched on the recovery process, including building permits and assistance from the Federal Emergency Management Agency.

“I think the meeting went well; it was very informative and I believe a lot of questions were answered,” Paul Banchetti said after the meeting.

Smith said the Mississippi River is falling, adding, “We don’t really see anything in the near future as far as rainfall is concerned, to turn that around.”

Eagle Lake and other communities in the Yazoo Backwater area were affected by severe flooding in February that inundated roads and more than 500,000 acres of farmland.

Eagle Lake residents were forced to leave their homes in early March when water from the Yazoo Backwater Area began overtopping streets in the community and getting into homes.

The extreme flooding forced the Warren County Board of Supervisors to issue a mandatory evacuation of the community on March 8.

McGee said water is off the section of Mississippi 465 that goes from U.S. 61 North to Eagle Lake.

“The good news is, I haven’t seen anything that we can’t fix yet,” he said. “We do have some damage.”

McGee urged residents to use caution driving flood-affected roads, explaining there may be problems that are hidden from view, and some roads may be closed.

“It’s going to take time to do this (repair the roads),” McGee said. “We’ve made it through a long flood, and we don’t want to mess it up at the tail end with an injury or a death of a catastrophic failure of a road. This stuff has been underwater for six months.

Besides flooding and road information, residents also received a brief update on the attempts to install the Steele Bayou pumps.

“If we’re going to get mad, let’s get mad at EPA,” Mississippi Levee Board chief engineer Peter Nimrod told the crowd, drawing a loud applause.

The pump station was the final piece of the Yazoo Backwater Project that was authorized by Congress in 1941. The pumps were expected to move 14,000 cubic feet of water per second from the land, or Delta, side of the structure to the riverside if and when gates were closed due to high river stages.

The project was vetoed by the Environmental Protection Agency in 2008, during the Bush Administration, because it was believed the pumps would adversely affect area wetlands and wildlife.

Nimrod said letters from residents supporting the pumps and new findings from the U.S. Army Corps of Engineers are persuading the EPA leadership to reconsider the veto.

“It’s not time to give up; it’s time for pushing harder,” he said.