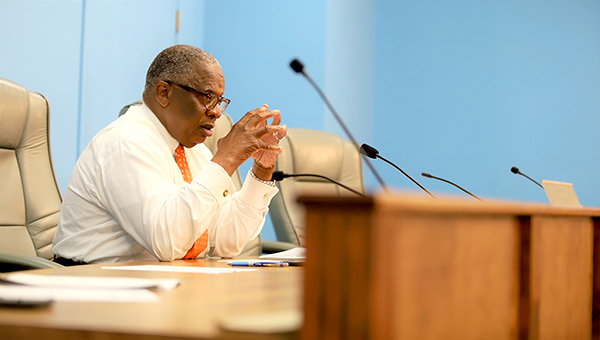 During Thursday’s Board of Mayor and Aldermen meeting, Mayor George Flaggs Jr. said personnel costs are higher than he first expected. Flaggs said the city will continue with the hiring freeze put in place by the board in 2017. (Submitted Photo)

With the Board of Mayor and Aldermen preparing to begin budget meetings, Mayor George Flaggs Jr. had a warning for department heads.

“Coming this budget year, you’re not going to get all that you want,” he said at Thursday’s board meeting. “Already in that budget is a pay raise, and if you want more than you expect, start reducing your personnel costs.”

“Personnel costs are more than I thought it would be at this day and time,” Flaggs said as he announced the hiring freeze approved by the board in 2017 will continue.

He added the city will not fund any position that has been vacant for more than 60 days except for the police and fire departments.

“Don’t look for it (new positions); you’re not going to get it,” he told the department heads.

Flaggs said personnel costs forced him to reduce a proposed 5 percent pay raise for police and firefighters to 4 percent for firefighters and 3 percent for police officers, which is the same pay increase for other employees and department heads, including the board.

He said the police department has a built-in annual 20-cent raise. Police also received a 50-cent raise the firefighters did not receive in the last round of pay raises. The minimum wage will go up from $8.25 to $8.50.

“No one gets a pay raise who hasn’t been here six months,” Flaggs said.

Flaggs said the board’s raise will have to be approved by resolution.

He said the raises will be funded by $300,000 in savings from the city’s health care costs during fiscal 2019.

“Yes, this is one-time money, but I believe that the 97 percent (budget), the freezing of positions and some other things are a safety net,” he said. “I don’t like spending one-time money on recurring expenses, but I think this will work, based on sales tax projections and health care savings.”

The new budget goes into effect Oct. 1 with the start of the new fiscal year.