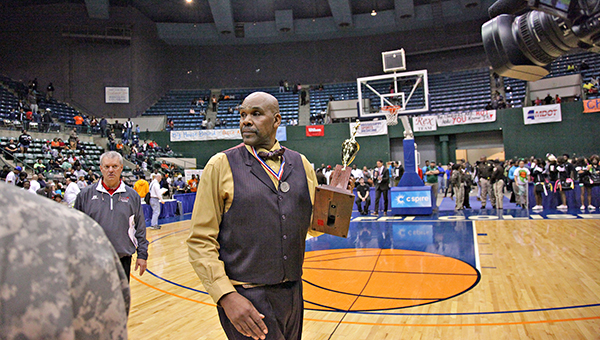 Former Vicksburg High boys basketball coach Dellie C. Robinson walks off the court at the Mississippi Coliseum in Jackson after the 2014 MHSAA Class 5A championship game. The MHSAA announced on Wednesday that it plans to move the championship games out of Jackson for the first time in nearly 50 years. (File/The Vicksburg Post)

The Mississippi High School Activities Association is making major changes to the format of its state basketball tournament.

Beginning this season, the MHSAA will play its championship games at either Ole Miss’ Pavilion arena or Mississippi State’s Humphrey Coliseum, and other rounds of the playoffs at several neutral sites scattered around the state.

The Northeast Mississippi Daily Journal reported that MHSAA associate director Rickey Neaves made the announcement Wednesday during the District One meeting at Itawamba Community College in Belden.
The site of this year’s state championships will depend on which college arena is available. The 2019-20 Southeastern Conference schedule has not yet been released.

Neaves told the Daily Journal that he hopes to rotate between Oxford and Starkville in the following years.
MHSAA executive director Don Hinton told the Sun Herald newspaper that the changes must still receive final approval. That could come as soon as next week when the MHSAA’s executive committee meets.

Hinton also told the Sun Herald that Southern Miss was discussed as a possible tournament site, but might not be available on the dates the MHSAA needs. He added that the Mississippi Coast Coliseum in Biloxi and BancorpSouth Arena in Tupelo could also get into the rotation as championship round hosts.

Other playoff rounds will be played in several places around the state beginning in 2020.
The first two rounds will remain at campus sites, on the higher-seeded team’s home floor. Then, in the quarterfinals, the venues will shift to neutral sites.

Neaves said the MHSAA is planning on playing the games on a Thursday-Friday-Saturday schedule with four games each day.

“What led to this change is that last year we had a lot of schools feel like the facility they had to travel to and play in was not big enough,” Neaves told the Daily Journal.

“We had two or three sites where fans could not even get in so we thought to put it on a more level playing field and have a better place to play at a neutral site,” Neaves added. “It’s the same format as years past, but it keeps schools from having to travel back and forth to Jackson three times to win a state championship.”