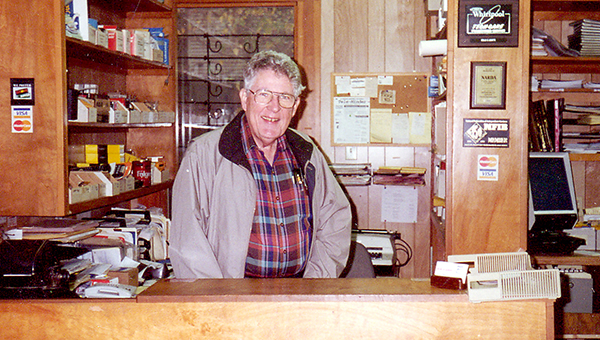 In this photo provided by the family, Roy Wells Jr., is show in the Wells & LaHatte location in downtown Vicksburg sometime during the 1980s. (Submitted Photo)

For 30 years, he was known as the Wells in Wells & LaHatte.

But family members and friends remember Roy Wells Jr. as one of the most intelligent people they knew, a good business partner, a man who loved tennis, an intellectual and a loving father.

Roy Wells died July 21 in Tupelo, where he moved so he and his wife could be close to one of their daughters. He was 88.

Born on Dec. 24, 1930, in Vicksburg, Wells was an excellent student and graduated at the top of his class at Carr Central High School in 1948, as valedictorian.

He attended Mississippi State University, where he studied electrical engineering and was president of the engineering honor society.

During his freshman year, he met his wife, Virginia Ann Lee, at a joint Wesley Foundation social with MSCW.  He was captivated by her big smile, and they were married four years later in August 1952.

He served in the United States Air Force and received a master’s degree in electrical engineering from the University of Illinois. He served three years’ active duty at Griffiss Air Force Base in Rome, N.Y., before returning to Vicksburg to join the family appliance business.

“He was a brilliant guy,” said Cicero LaHatte, his business partner for 30 years and his cousin. “He was up there with Einstein; he just never did anything great, so no one knew about him.”

Wells and Cicero LaHatte took over the business when their fathers, who founded the business, retired.

LaHatte recalled they did most of the electronics repairs on televisions and radios the store sold before taking over the business.

“He was a good partner,” he said. “He was a pleasant, easy going fellow. We got along pretty good. We were very compatible; the only arguments we had were not about ego, but about which way to go to solve the problem.”

Lisa McLaughlin, a longtime Wells & LaHatte employee, said she met Wells and his wife through Crawford Street United Methodist Church when she was 17.

“Mr. Wells has at one time been my Sunday school teacher, and he was a big influence on me, teaching me the business and teaching me bookkeeping. He taught me a lot of things at the shop,” she said.

“He was very nice. He was easy to get along with, he was flexible; if you needed time to go do something that was fine. He was sort of a mentor. He told me not only things about the appliances and the appliance business but about life in general, and we had a lot of good discussions about daily life and the way things needed to be done. It was really good.”

“I knew him through his kids,” Robert Morrison III said. “We were friends; we kind of grew up together and our families had been friends for a long, long time. My personal association with Roy was in a Sunday school class at Crawford Street Methodist. It was an intergenerational class.”

Wells’ daughter, Catherine Wells Monroe, called the class “a creative thinking class. I think he enjoyed that, and he started writing on different subjects.”

“He loved to play tennis, and I played with him a time or two. He was a good player, and that exposed my secret at winning at tennis; play somebody 25 years older than you,” he said.

Another tennis partner was LaHatte’s daughter.

“He used to play a lot with my daughter when he was here in Vicksburg,” he said. “She used to joke about it, said she was scared he was going to have a heart attack going back and forth, left and right.”

Wells’ daughter, Linda Wells Rice, said her father “was always there; supportive. He did a great job taking care of our family.”

Because he was in the retail business, she said, Wells worked “six days a week, but when he came home, he was there for us. He was the quieter of our parents. His love and support was definitely there, but it was more subtle.”

She and Monroe recalled how their father played baseball with their brother David.

Summer vacations, they said, were taken “at the end of air conditioner season.”

Monroe recalled one vacation in Arkansas where the family decided to sign their names backward.

“His name backwards was Eel Yor Sllew Jr.,” she said, adding her father later received a letter from an Arkansas company wanting to sell him real estate. The letter was addressed to “Yor Sllew.”

“He thought it was funny, because he tried to figure  out how they tried to address the letter.”

And there was their father’s Jeep.

“He had a Jeep that would scream as it drove,” Monroe said. “All the dogs in the neighborhood would chase him. We knew when he was coming home because of the noise that jeep made.”

Rice recalled their father would take them to school on his way to work, and let the children shift the Jeep’s manual transmission.

“We’d take turns sitting in the front seat and he would let us shift the gears while driving to school,” she said.

Monroe said their father didn’t want to leave Vicksburg, but made the move to Tupelo after their mother got cancer so she could be near Rice.

“He was a great guy,” Morrison said, “And I think anybody who knew him sensed his intellect and his absolute good nature.”