Vicksburg 12U All-Stars stymied at regional 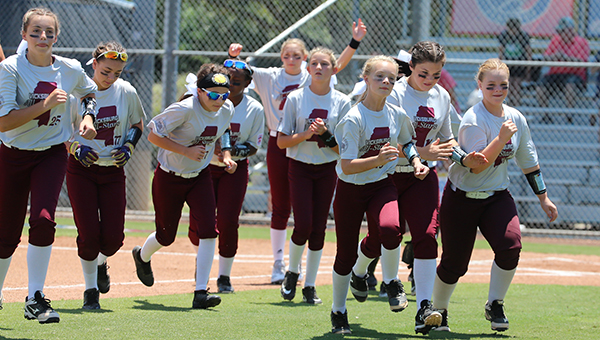 Members of the Vicksburg 12U All-Stars head to the dugout after being introduced before their game with Colorado at the Little League Softball Southwest Regional on Wednesday. Vicksburg lost 8-0 to Louisiana in a winners’ bracket game on Thursday. (Rod Aydelotte/Waco Tribune Herald)

One day after they enjoyed a great start to the Little League Softball Southwest Regional, the Vicksburg 12U All-Stars had their roll stopped cold.

Vicksburg fell into the losers’ bracket of the double-elimination tournament. It will play Eastdale, New Mexico in an elimination game Friday at 10 a.m.

Eastbank improved to 2-0 in the tournament and will face Greater Helotes, Texas, on Saturday morning. Eastbank has outscored its opponents 19-1 in its first two games.

Vicksburg beat Colorado Springs, Colorado, 3-1 in its opener on Wednesday but never got its bats going against Giardina. The right-hander struck out three of the first five batters she faced and only allowed two base runners. Trinity McGloster was hit by a pitch in the second inning and Kamryn Morson walked in the fourth. Neither got past first base.

Giardina finished her outing by striking out the side in the fifth inning. She was moved to first base to start the sixth, with Louisiana holding an 8-0 lead. Hailey Peterson relieved her and retired the side in order to close things out.

Giardina also hurt Vicksburg at the plate. She went 3-for-4 with a triple, RBI, and two runs scored. She singled and scored during a three-run third inning that gave Louisiana a 4-0 lead, and then tripled and scored on a wild pitch in the top of the sixth.

For Vicksburg, pitcher Kyleigh Cooper allowed eight hits and five runs, only three earned, in four innings. She struck out one, walked one, and hit two batters. Madison Pant pitched the last two innings and gave up three runs.