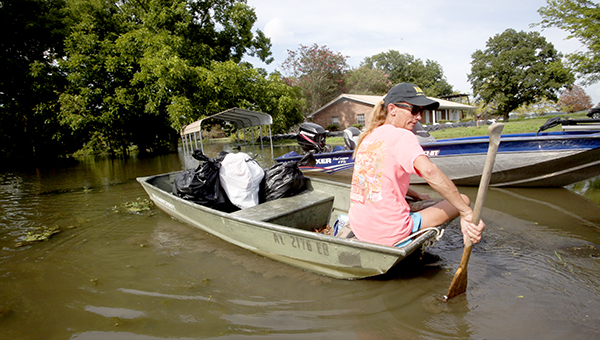 Carmen Hancock uses an oar to navigate from her boat from home to take trash out through flooding in Valley Park. (Courtland Wells | The Vicksburg Post)

As the floodwaters in the Yazoo Backwater continue to fall, the status of the final piece of a 48-year-old plan to protect the backwater area remains uncertain.

The Steele Bayou pump station, which was to be built on the Steele Bayou Control Structure to help protect the South Delta from flooding, was vetoed by the Environmental Protection Agency in 2008.

But the extreme flooding in the Yazoo Backwater Area that has covered more than 500,000 acres of land in the Delta has energized efforts at the local and state level and in Washington, D.C., to get EPA officials to reconsider the agency’s decision and approve the project.

Further action on the effort, however, is presently at a standstill.

“The Vicksburg District has submitted the updated data to the EPA and the EPA is in the process of reviewing that data,” said Peter Nimrod, chief engineer for the Mississippi Levee Board. “The ball is in their court to evaluate that and see if it is a game-changer; whether they can overturn the veto or modify it, whatever the case may be.”

He added the Corps may still have more data to provide.

Reagan Lauritzen, public affairs director for the Vicksburg District, said the District is researching 10 years of data on the area with scientists and engineers at the U.S. Army Engineer Research and Development Center’s Environmental Laboratory.

The pumps were expected to move 14,000 cubic feet of water per second from the land or Delta side of the structure to the riverside if and when gates were closed due to high river stages.

Designs had it protecting about 630,000 acres in the South Delta from flooding. Flooding to residential and nonresidential structures in the Delta would be reduced by 68 percent when the pump station is completed, according to a report from the Corps.

The EPA took into account multiple revisions in the plan in its veto but concluded the project would adversely affect area wetlands and wildlife.

“There is a total different leadership at the EPA than in 2008,” Nimrod said. “They seem to understand that obviously this historic event has been horrible for the environment and horrible for the people,” he said. “I think they’re looking favorably on looking to try and do something with that. I don’t know.

“That’s the vibe I get, is that they understand and they realize that something that needs to be done.”

He said, however, the EPA staff will review the data and report their findings to the administrators “and the leadership and the staff are going to have to decide whether to maintain the veto or overturn it or modify it.”

Residents in the Yazoo Backwater area were affected by severe flooding in February that inundated roads and more than 550,000 acres of land.

Residents in the Eagle Lake community were forced to leave their homes in early March when water from the Yazoo Backwater Area began overtopping streets in the community and getting into homes.

The extreme flooding forced the Warren County Board of Supervisors to issue a mandatory evacuation of the community on March 8.

Nimrod said the backwater area is draining, with the water level at 94.5 feet at the Steele Bayou Control Structure and “the water’s dropping about a half-foot a day, and that’s great news.”