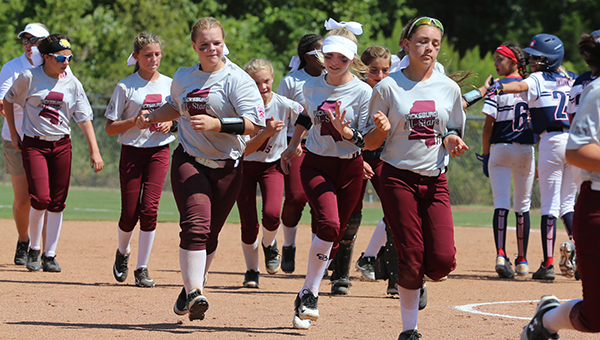 The Vicksburg 12U All-Stars run back to the dugout after defeating Colorado at the Little League Softball Southwest Regional on Wednesday. Vicksburg was eliminated from the tournament after losing 15-1 to Eastdale, New Mexico on Friday. (Rod Aydelotte/Waco Tribune Herald)

By late afternoon Friday, the Vicksburg 12U All-Stars were already at a water park in Waco, Texas, quickly switching from softball to vacation mode in their minds.

Their stay at the Little League Softball Southwest Regional ended earlier than they wanted it to, but there was still time to have fun and make friends and memories.

Vicksburg, the Mississippi champion, was eliminated from the regional with a 15-1 loss to Eastdale, New Mexico on Friday. Vicksburg won once in three games in Waco, which coach Jeremiah Pant said made it a successful trip.

“That was the best part about it, was making a lot of good friends,” Pant said. “It was a great experience for the girls and something they’re going to remember for the rest of their lives. As long as they get to do that, then it was all worth it.”

One day after being no-hit by Eastbank, Louisiana, the Vicksburg All-Stars only got two hits against New Mexico in an elimination game on Friday.

Lili Kistler had a triple for Vicksburg in the first inning, scored the team’s only run on an error, and also was hit by a pitch. Kamryn Morson led off the fourth inning with a single, but was stranded at second base.

The only other batters to reach base were Madison Pant and Macie Barnette, who were both hit by pitches.
Vicksburg finished the tournament with seven hits in three games. It managed to beat Colorado Springs, Colorado 3-1 in its opener, then was outscored 23-1 in the last two games against Louisiana and New Mexico.

New Mexico pitcher Elli Breckenridge struck out five batters, walked none, and gave up one unearned run in Friday’s four-inning game. She also went 2-for-3 with two RBIs at the plate and had plenty of run support.
New Mexico’s first four batters in the top of the first inning all reached base, with Brooklynn Eardley delivering an RBI single for a 1-0 lead.

A double by Isabella Swanson drove in two runs, and Breckenridge capped things off with an RBI double that made it 8-0.

Vicksburg got a run back in the bottom of the first, but Breckenridge retired nine of the last 12 batters she faced. New Mexico scored seven more runs in the fourth inning and won via the mercy rule.

Swanson was 2-for-2 with three RBIs and two runs scored for New Mexico, which totaled 13 hits as a team. The first five batters in the lineup went a combined 8-for-13 with eight RBIs and eight runs scored.

“That first inning it fell apart and we couldn’t recover. Every once in a while you have a day like that, and unfortunately it was today,” Jeremiah Pant said. “They played really well against Louisiana. Then today it was just eight runs in that first inning and that screwed up our momentum.”

New Mexico will play Green Country, Oklahoma in another elimination game Saturday at 2 p.m. The championship game of the regional is on Sunday. The winner advances to the Little League Softball World Series in Portland, Oregon, Aug. 7-14.