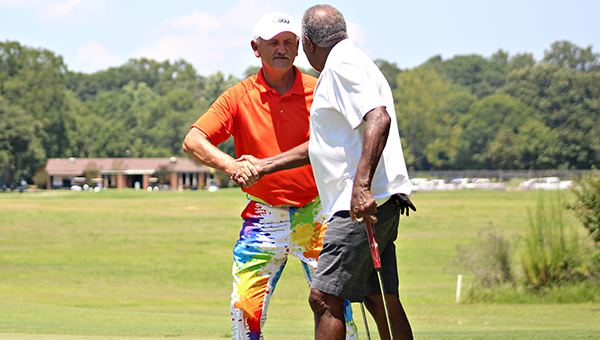 The first time he won the Warren County Senior Golf Championship, Jim Darnell had the round of his life. This time, he hung on for dear life.

Darnell lost a five-shot lead on the back nine as John Ferguson made a remarkable charge up the leaderboard Sunday, but he beat Ferguson in a one-hole playoff to win the tournament for the second time in four years.

Darnell also won the title in 2016, when he made five birdies in the first round for a lifetime best 73. In 2019, he overcame a two-shot deficit heading into the final round and won after Ferguson shot a 1-under par on the back nine to force the playoff on a wild day at Clear Creek Golf Course.

Ferguson’s surge brought he and Darnell into a tie at 157 for the tournament. The two players went to the first hole for the playoff and Ferguson misfired on his tee shot. He left a long par putt just short as well and wound up with a bogey, while Darnell made par.

“This is as close to pro golf as I’m ever going to get,” Darnell said with a smile. “I watch a lot of pro golf and I think about what they do. This is my moment and I’m enjoying it.”

Dori Lagrone finished third in the Senior Championship with a 158. Joe Grayson, the first-round leader, shot 84 on Sunday and was fourth at 160. Bob Burr rounded out the championship flight at 164.