Humane Society’s permanent resident does as he pleases 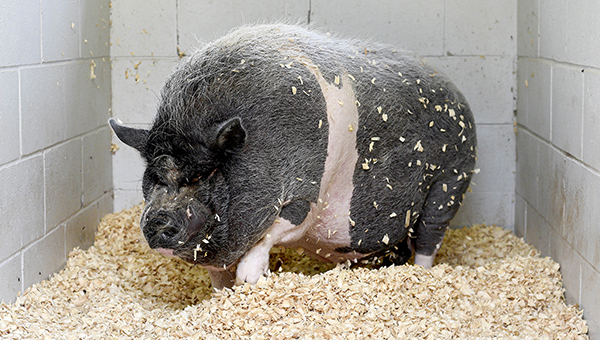 J.D. walks towards a food bowl in a kennel at the Vicksburg Warren Humane Society Tuesday. (Courtland Wells | The Vicksburg Post)

Weighing in at nearly 300 pounds, the potbelly pig that took up residence at the Vicksburg Humane Society eight years ago pretty much has free run of the place.

“When J.D. decides he wants to do something, you just can’t stop him,” Georgia Lynn, executive director of the Vicksburg Humane Society, said.

J.D., which stands for Jimmy Dean, was not always a large porker. When he arrived at the shelter in 2011, Lynn said, he was just a little piglet.

“Someone had left him in our overnight drop off, which we don’t have anymore,” she said.

Initially, J.D. had been available for adoption, but when Lynn discovered those who were eying him had another intention rather than taking him home as a pet, she decided it best for him to remain at the shelter.

“They wanted to eat him,” Lynn said. “So, I explained to them he was a potbelly pig, not really that kind of pig, and we don’t adopt animals out to be consumed for human consumption.”

And speaking of consumption, in addition to J.D.’s determination to do as he pleases, Lynn said, he has a particular appetite that includes a couple of favorite foods.

“He loves watermelon and popcorn,” she said, adding employees at The Open Market on Washington Street even donate all their unsold popcorn to the Humane Society for J.D.

Early on, J.D. was fed special potbelly pig food, Lynn said, but through the years, he decided to maintain a diet of his favorites and dog food.

“So he eats dog food and popcorn from The Open Market and watermelon if one of us at the shelter brings it to him,” Lynn said.

Also, when J.D. decided he wanted new digs, he just up and moved to a different kennel.

Originally, he had been sheltered in one of the largest kennels, and Lynn had even supplied him with a little house inside, she said.

However, about four years ago, Lynn said J.D. got a wild hair and walked off into the field and didn’t come back for five days.

Lynn said they all tried to entice him back with watermelon, but his stubbornness prevailed.

“You couldn’t make him do anything if he didn’t want to do it, because he was so huge,” she said.

Upon his return to the shelter, J.D. decided he wanted to move and took up residence in one of the smaller kennels, and has been there ever since, Lynn said.

J.D.’s kennel is opened every morning, Lynn said, allowing him the opportunity to roam around, but unlike in his younger days, when he would go and greet visitors at their vehicles, he now mostly sleeps, coming out only for popcorn and watermelon.

“But the kids still love to look at him when they come to visit,” Lynn said.