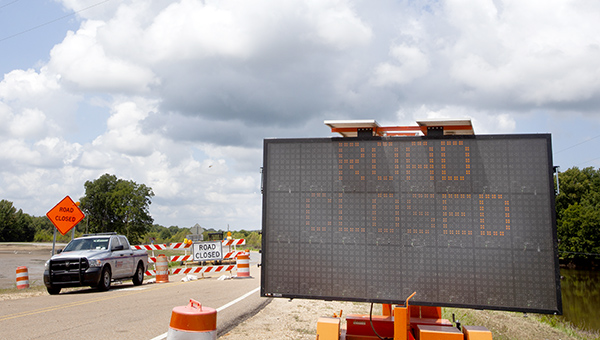 Highway 465 is seen blocked by a "Road Closed" barricade and a MDOT truck Wednesday morning. (Courtland Wells | The Vicksburg Post)

Water, he said, “Is the one thing we can’t control. The rest of it (damage), we’re up and ready to deal with.”

Magee said water has receded from Mississippi 465 from U.S. 61 North to Eagle Lake, and MDOT crews are making repairs on the road.

A section of 465 from the backwater levee to the gin, however, remains underwater.

While water in the backwater area is dropping, he said, “There is a significant amount of water trapped on the south side of 465.

“On one side of the road, we’ve got water coming over the road in places and all that area has to be drained by two pipe culverts; two cross drains.”

But the flow through the pipes, Magee said, is unable to keep up with the speed at which the backwater is falling.

“The backwater is falling faster than that (the water drained by the culverts) is. That section is the controlling factor, and that will determine when the rest of it gets open,” he said.

He said workers have identified problems in the backwater section of Eagle Lake, but they cannot be repaired until the water level has dropped.

“We’re going to wind up digging some sections of roadway where there are some base (roadbed) failures and pavement failures, but we can’t dig it out until the water is below (the elevation of the roadbed),” he said.

Another problem, he said, is a section of 465 in the backwater area where the shoulders are very narrow and water is passing over the road, forcing MDOT to “rework the shoulders and hope we don’t have any slides. We’ve been fortunate so far, but we have not seen much in the way of slides in that section.

“We’ve got slides to look out for, trees falling without any notice; there’s still hazards to the travelers,” he said.

“The good news is it’s nothing we’re not prepared to deal with,” Magee said. “We know what it is, we know where to do it, we’ve got the material to take care of it, we just need mother nature to cooperate, and it’s getting there.”

Magee said the road currently is not safe for travelers, adding until he and other MDOT officials feel better about 465’s safety, it will remain closed.

“We didn’t make it this far to mess up on the back end of this thing,” he said.

“We’ve got to have our best shot at safety before we can turn everybody loose on it.”

Magee said the north end of 465 no longer has water on it and remains closed to traffic, “but we have local traffic that is using it.”

He said sightseers have been forced out of the area. He said people who do not live in the area have been coming in using GPS “and they’re just blindly following GPS, and GPS is taking them into some of the strangest places.

“We’ve found them in some of the oddest places, and we’d like for those people to not come to Eagle Lake and find out they can’t get through and turn around. We’re going to keep those barricades up.”