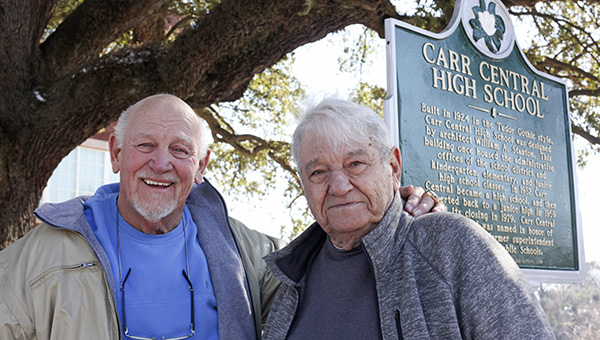 Billy Shaw and Richard Price pose for a photo at Carr Central High School in January 2018. Price will be inducted into the Mississippi Sports Hall of Fame Saturday in Jackson. Shaw is a member of the Pro Football Hall of Fame. The two played together at Carr Central in the mid-1950s. (File/The Vicksburg Post)

The 1950s were a pretty remarkable time for football in Vicksburg.

Between 1955 and 1958, Carr Central, Culkin Academy and St. Aloysius combined to win an astounding 81.7 percent of their games while producing future college All-Americans and pro players like Glynn Griffing, Billy Shaw and Johnny Brewer.

Amazingly, one of the best players of that era somehow became one of the most overlooked — until now.
Richard Price, a linebacker who led Carr Central to the 1955 Big 8 championship and was an All-Southeastern Conference player at Ole Miss, will be inducted into the Mississippi Sports Hall of Fame in Jackson. It’s an honor that’s well deserved and long overdue.

Price’s talent was legendary. He was a second-team All-America at Ole Miss in 1960 and helped the Rebels win the Sugar Bowl that season and in 1958.

Shaw, a longtime friend and former Carr Central teammate, credits Price with making him a star. Shaw went on to play 10 seasons with the Buffalo Bills and was inducted into the Pro Football Hall of Fame in 1999.

“If you could eke out one good hit against him, you felt like you had accomplished something,” Shaw said in an interview with the Vicksburg Post in 2018.

Football is only part of Price’s story, though. He grew up in a poor family and was admittedly a bit of a problem child.

Despite those humble beginnings, his talent and hard work turned him into a success. He was selected in the eighth round of the 1961 AFL draft by the Oakland Raiders, but quickly left football behind.

He built a successful insurance agency and several other businesses, found religion in the early 1970s, and gained a reputation as both a Christian and a philanthropist. In 1998, former Ole Miss chancellor Robert Khayat started the Richard Price Courage and Compassion Award, given each year to a senior lineman on the football team.

Maybe the powers that be at the Mississippi Sports Hall of Fame overlooked Price as the years went on. Maybe they forgot about him. Perhaps they thought he was already a member. Whatever the case, he’s going in this Saturday. It’s about time.