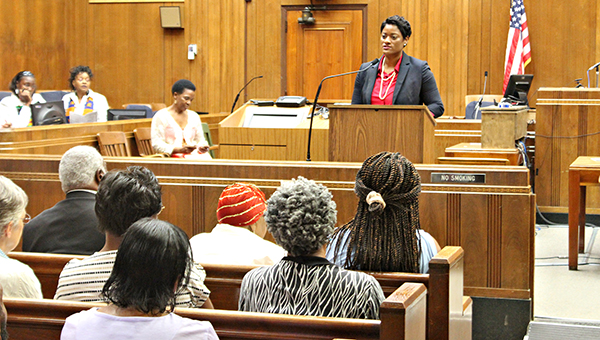 Candidates for supervisor Districts 1 and 3 attended the forum sponsored by the Vicksburg Alumnae Chapter of Delta Sigma Theta Sorority Inc., Blacks in Government, and the NAACP. The forum was held Thursday at the Warren County Courthouse.

The forum was open to candidates who are involved in contested races in Tuesday’s party primary elections.

The questions were the only two directed to the candidates. The education question was tied to a property tax increase for the school board approved by the supervisors in 2018. The school district has been criticized for its apparent poor state performance ratings.

The tax increase was requested by the school district for its debt service needs involving the $83 million general obligation bond county voters approved in March 2018 for facilities upgrades. The millage increase raised county millage from 103.06 mills to 106.85 mills.

“That’s where the accountability should be,” he said. “It shouldn’t be with schools, it should be in Jackson with the Education Department.”

Selmon said the supervisors are required by law to increase the millage for the school district if the trustees request it.

He said he did not believe “pumping money into a school system is always the answer,” adding there are alternatives available, but did not name any.

Jackson said the county has to invest the resources to improve education. She said the boards should look where cuts can be made before approving tax increases.

Jeffers said the Vicksburg Warren School District “has the potential to be one of the best school systems in the state.” He outlined programs like “The Leader in Me” as ones that will improve the system as they progress to the upper grades.

Herring said the county has to attract more teachers, adding the county’s entire education system needs to be held accountable.

On economic development, Jackson and Jeffers feel the county needs new leadership willing to look ahead and work with industries.

Jeffers said business wants to come to the county, “But in order to get it here, we have to show we are forward thinking.

“We’re allowing older leaders, politicians, who will accept the ways of the old days,” he said.
Herring recommended partnerships with community colleges and tax incentives for companies.
“We need to find out what is keeping these companies back and attack those and resolve to attract those corporations,” he said.

Selmon said local programs that have prepared people for work accounted for 687 jobs in the community.