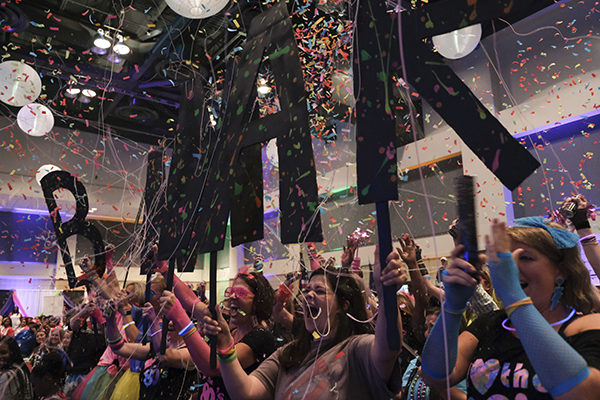 VWSD kicks off the school year with music, pep talks at annual convocation

The Vicksburg Warren School District’s teachers and administrators walked into the Vicksburg Convention Center Friday afternoon and left two hours later on an emotional high and ready to begin the 2019 school year.

The school district’s annual convocation was a high-powered event infused with pep talks, cheers and high-energy musical performances by students and teachers.

Teachers and administrators from the district’s schools sat together in groups marked by balloons and other forms of identification. When their school’s name was called, they jumped up with cheers, noisemakers and confetti.

“I love this day,” VWSD Superintendent Chad Shealy said. “This is the day before the real day for us.”

That day, he said, is when the students show up, “and we do what we got in this business to do and serve our community and move our students to success.

“We want all our students to understand that education leads to employment.”

Sherman Avenue’s pre-K, he said, was the second highest scoring school in the state with 718. The state average, he said, is 559.

Bovina’s kindergarten scored 782, 71 points above the state average of 711.

“Our children are becoming more prepared (for school),” he said. “The next group is smarter than the one before it.”

Also, Vicksburg High’s graduation rate was about 79 percent, and Warren Central’s between 84 and 86 percent. The state average is 84.

“Our hard work is paying off,” Shealy said.

“You have the power to change the world,” he told teachers. “I know you can work anywhere you want. I thank you for choosing to serve right along with me.”

The group also heard from motivational speaker Dr. Adolph Brown, an educator and businessman who discussed his life and described how teachers and others who cared about him looked inside the students and helped them reach their potential.

Brown commended the school district, saying he had been to programs all over the U.S. and the world, but it was good coming to Vicksburg, “Because Vicksburg, you get it.”

Later, he tweeted about his visit to Vicksburg, adding, “Thank you #vicksburgschooldistrict for putting students first! #ItShows.”

Students and teachers performed musical numbers including a version of Queen’s “Bohemian Rhapsody” accompanied by strobe lights. They finished the tune with “students really matter to me.”

“It was electrifying to see our kids enjoy that and to lead our convocation,” Shealy said after the program. “Our speaker, Dr. Brown, was incredible. He echoed exactly what we wanted.”

Vicksburg Intermediate School counselor Tia Doss said she loved attending the convocation, “Because it lifts you up; it’s a boost and it gets you ready for the coming school year.”

“As usual, it inspires,” said Marlena Bolls, an assistant principal at Vicksburg Intermediate. “It’s full of energy and gets you excited for the school year.”

Dr. Jerry Pittman, assistant principal for the Architecture, Construction, Mechatronics and Engineering program at Vicksburg High School, called the convocation “very uplifting; it gets you motivated and reminds you that you can make a difference in a student’s life.”