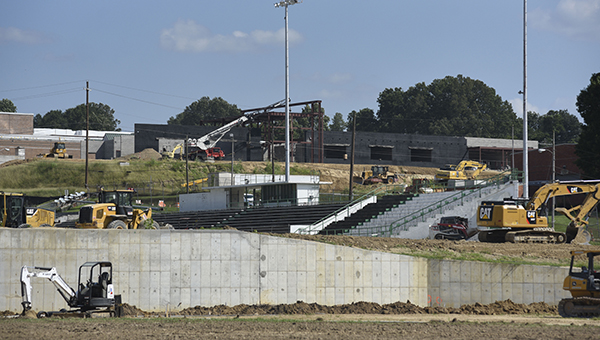 When the dust has settled and the projects complete, Warren County will have the most modern school buildings in the state, architect Gary Bailey told members of the Vicksburg Lions Club.

Bailey is managing the $132 million school district-wide capital improvements project to renovate and expand school facilities for project architect Dale Bailey Architects. He gave the Lions an update on the project, which is funded in part by an $83 million bond issue.

He said the first projects under the plan, to re-roof Beechwood Elementary and Vicksburg Junior High, are completed.

“Those are not glamorous projects, but if you ask a teacher who’s got water dripping on their head, they’ll tell you it’s important,” Bailey said, adding the two roofs were the worst in the school district. He said there are more roofing projects totaling $13 million scheduled for district schools.

He said work is under way on the $37 million Vicksburg High School renovation project, which is the largest in the district. The renovated school, like the renovated Warren Central High School, will be fully open in 2021.

Bailey called Vicksburg High “one of the most complex existing buildings I’ve worked on in my career,” he said. “Vicksburg High has multiple levels.”

He said a new front entrance is being built for the school and a $20 million addition is being constructed to house its career academies.

The project, he said, “Is well under way; they’ve poured all the concrete for the addition. They’re fixing to start roofing the front addition.”

He said Thrash Commercial Contractors is working on renovations at night to get classrooms ready for students.

“We’re trying to create a sense of pride in the kids going to school there,” Bailey said. “My experience has proven that no matter who that kid is, no matter their socio-economic background, they want to have pride in their schools.”

The Warren Central High School renovations, he said, are a $30 million project. Bailey said plans are to unite two buildings and develop an interior public space.

The area will also serve as the lobby for the school’s gymnasium, which is also being renovated and expanded with new bleachers. Bailey said a new parking lot has been paved, and is being marked.

While work continues on the high schools, Bailey said a notice to proceed will be issued for the Academy of Innovation, which will be built on land at the corner of Mission 66 and Rosa A. Temple Drive next to Warren Central Junior High School.

The three-story building will include personal desks and storage areas for each student, and few walls.
When completed, Bailey said, the building “will be the most creative in the state. It will be the finest building this state has to offer.”

Bailey said work is under way on the new athletic facilities for Vicksburg High and Warren Central. The first phase of the project includes new artificial turf football and baseball fields. The second phase will include new lighting and buildings.

While work on the football field at Vicksburg High is running behind, he said Warren Central’s field will be ready for the Aug. 23 Red Carpet Bowl.

• Bids for the Beechwood renovations are expected to be advertised in August, with the projects for Bovina Elementary and South Park Elementary expected to go out for bid in November.