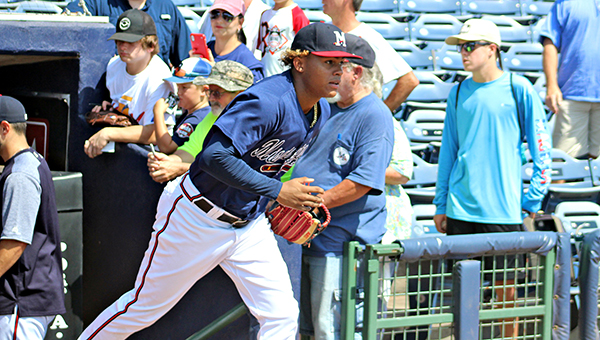 Mississippi Braves centerfielder Cristian Pache runs out of the dugout before a game this season. Pache, the No. 1 prospect in the Atlanta Braves organization, was one of four M-Braves players promoted to Triple-A Gwinnett on Monday. (Ernest Bowker/The Vicksburg Post)

PEARL — The Mississippi Braves were reminded of a harsh fact of life in minor league baseball — success comes with a cost.

Four of the Double-A team’s top players, who also happen to be among the top prospects in the Atlanta Braves’ organization, were promoted to Triple-A Gwinnett on Monday.

Outfielders Cristian Pache and Drew Waters, and pitchers Ian Anderson and Tucker Davidson were all promoted before the M-Braves’ doubleheader against Tennessee.

Waters leads all of Double-A baseball with 134 hits. He was a second-round draft pick in 2017 out of Etowah High School in Woodstock, Georgia.

Anderson is the No. 3 overall prospect in Atlanta’s organization, and the top pitching prospect after the team drafted him in the first round in 2016.

Anderson started 21 games for the M-Braves this season and is tied for second in all of minor league baseball with 147 strikeouts. He had a 7-5 record with a 2.68 ERA in 111 innings pitched.
Anderson threw a no-hitter for the M-Braves on June 28.

The 23-year-old Davidson has also started 21 games for Mississippi this season, and leads all of Double-A with a 2.03 ERA. He has 122 strikeouts and only 45 walks.
Davidson is the 13th-ranked prospect in the Braves’ organization. He was a 19th-round draft pick in 2016.

Pitcher Nolan Kingham was promoted from High-A Florida to Mississippi, and the infielder Luis Valenzuela was released.

Burrows, Lien, Unroe and Morales have all played previously with the M-Braves.