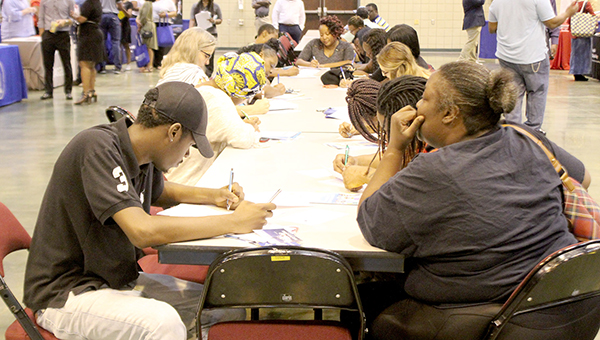 Some of those attending the annual Vicksburg Job Fair Tuesday at the Vicksburg Convention Center fill out applications. More than 40 businesses and organizations were at the job fair. (John Surratt | The Vicksburg Post)

Area job-hunters looking for work or a chance to find a better job met with prospective employers Tuesday at the Vicksburg Convention Center.

A total of 42 companies were ready to meet with the estimated 400 people attending the annual Vicksburg Job Fair in the convention center exhibit hall to talk about openings, pay, benefits and other information about their companies.

Organizations ready for the potential applicants included the city’s four casinos, the capital of Vicksburg and the Vicksburg Police and Fire departments, Entergy, the FBI, state agencies, Unified Brands, Continental Tire and other businesses and industries.

“We’re hiring all trades — welders, pipefitters, pipe welders, electricians, painters,” said Gene Ivey, a recruiter for Ingalls Shipbuilding in Pascagoula. “We’re looking to hire 3,000 to 4,000 people over the next two years. We’ve got $24 billion in backlog.”

“We’ve already had 200 people and we’ve been open an hour,” Todd said about 10 a.m. Tuesday. “We’ve got about 40 companies looking to hire and we’ve got people looking for jobs, and that’s a good day for Vicksburg.”

“It went very well,” Job Fair chairman Don Brown said. “I’m really pleased with the quality of the employers we had, and the attendees who came. They looked like they were ready to get a job and put their best foot forward. Talking to the employers, they were very pleased with everything.

“It’s such a quality event, I think it’s well worth the effort in getting people face to face with the employers. Everybody seemed very pleased.”

With turnout low, officials urge voters to get to the polls