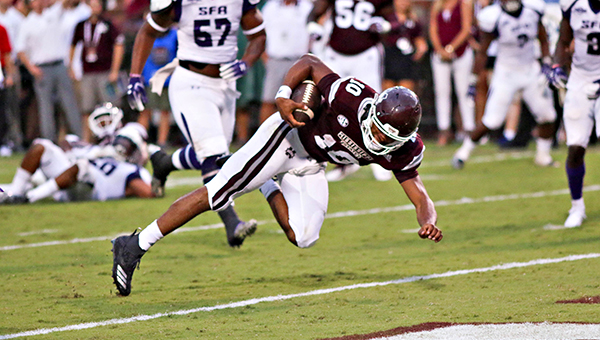 STARKVILLE (AP) — The first question for Mississippi State coach Joe Moorhead following the Bulldogs’ initial preseason practice was a tongue-in-cheek inquiry about whether the much-anticipated quarterback battle had been settled after just one session.

The second-year coach grinned and played along.

“Right after stretch we picked one,” Moorhead quipped.

If only it were that easy.

The main story of Mississippi State’s preseason camp is the two-man quarterback competition between last year’s backup Keytaon Thompson and Penn State transfer Tommy Stevens. The winner will be expected to improve the Bulldogs’ passing offense, which was inconsistent on good days and awful on the bad ones last season.

If Moorhead has identified a leader in the QB race, he’s not letting anyone know. Like most coaches, he’d like to know his starter sooner than later, but won’t rush the decision.

“It was one practice in helmets and shirts, installed about four or five passes,” Moorhead said after the first workout last week. “They all had their moments. Just excited to see how the competition plays out.”

The 6-foot-4, 225-pound Thompson showed moments of promise as the backup to Nick Fitzgerald over the past two seasons. He threw for 458 yards last season, six touchdowns and just one interception while also running for 226 yards and four touchdowns.

But a career completion percentage of less than 50 percent is a problem. Moorhead has made it known in the past that he’d like that number up in the 60s.

Thompson said the coaching staff did a good job of communicating Stevens’ arrival and it didn’t affect how he prepared for preseason camp. He said Stevens is “a great guy” and that their relationship is good.

“There’s always competition and you want to go out there and get better, no matter who is behind you or who is in front of you,” Thompson said. “You still want to be the best player you can be.”

The 6-5, 236-pound Stevens was a versatile backup for the Nittany Lions the past three seasons, playing behind Trace McSorley. The graduate transfer has thrown for 304 yards in his career, including four touchdowns while completing 58.5 percent of his throws.

He’s also run for 506 career yards and eight touchdowns and even caught 14 passes.

Moorhead was the offensive coordinator at Penn State before arriving at MSU and had a previous relationship with Stevens. When the quarterback decided to transfer, Starkville was a natural fit since he already had broad knowledge of Moorhead’s offense.

“He knew 100 percent,” Moorhead said on Friday. “There were things that we did in our offseason studies. There were also some things that we added that wouldn’t have been just new to him but to everyone. We changed some words in the plays, but he understood the concepts. It wasn’t like trying to teach it to a new freshman. It was like teaching it to a guy who’s been in the system for three years.”

Stevens said some of the terminology is different than at Penn State, but his comfort with Moorhead makes it a better situation than a normal transfer might experience.

“Knowing the system and really this being my fourth year in this offense,” Stevens said. “I guess it makes me the most experienced person here in this offense and helps me be a coach at some point. Help those guys learn.”