Agencies stand firm, together in fight against terrorism 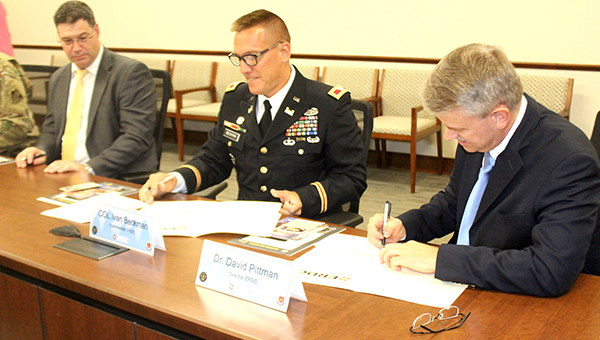 Local officials and officials with the U.S. Army Corps of Engineers’ divisions in Warren County Monday affirmed a commitment to maintaining vigilance against terrorism.

Pace and Danczyk said the city and county have had a good working relationship with ERDC and the Corps.

“ERDC is the cornerstone of our community, and just so valuable,” Danczyk said. “It’s a pleasure to partner with ERDC.”

The ceremony was part of an observance of August as Anti-Terrorism Month, which was established by the Department of Defense, at the U.S. Army Engineer Research and Development Center.

“Although Vicksburg is considered a safe environment where threats of terrorism aren’t necessarily an everyday occurrence, that doesn’t mean service members, civilians and the community can be any less vigilant,” ERDC commander Ivan Beckman said Monday.

He said ERDC observes Anti-Terrorism Awareness with special programs and operations security training to increase and encourage awareness throughout the installation.

He said a 2017 Government Accountability Office report indicated that in the years since Sept. 11, 2001, there have been 85 acts of terrorism in the U.S.

“We feel it’s a great time for us to express our unity with the community in the effort to maintain anti-terrorism awareness,” he said, “Especially in view of the tragic domestic terrorism events that took place over the weekend in Dayton, Ohio, and El Paso, Texas.

“We have to be very vigilant, because terrorism is definitely something we have to protect ourselves from,” he said, urging the officials signing the proclamation to be proactive in identifying potential threats to the community. “See something, say something. We must be aware,” he said.

“We feel this event (the signing) is especially appropriate today. Although we set aside August as Anti-Terrorism Awareness Month, we must remain vigilant throughout the year,” Beckman said.