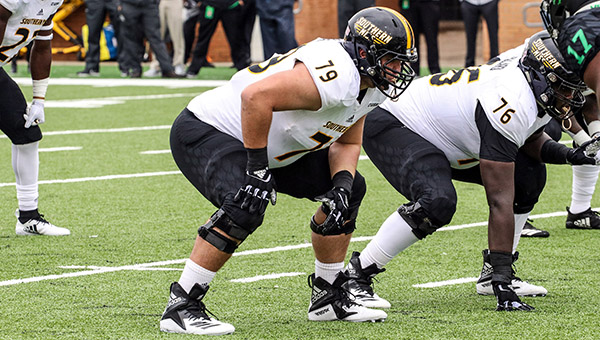 HATTIESBURG — Southern Miss’ offensive line enjoys the most depth that it has seen in some time, with 17 players and eight underclassmen vying for playing time.

At the head of that group is a veteran entrenched at his position.

Redshirt senior Drake Dorbeck, a Vicksburg native and former St. Aloysius star, is entering his third season as a starting tackle. As his career winds down, he’s trying to mentor the Golden Eagles’ younger players and pass on the lessons he’s learned over the years.

“When I first got here I had a lot of older guys mentor me to get me where I needed to be,” Dorbeck said. “I want to impress on the younger guys to take care of their bodies right now, learning the offense and simplifying it as much as you can, but also knowing to start reading defenses and picking things up.”

Dorbeck has started on USM’s offensive line for the last two seasons, missing only three games early in the 2017 season with an arm injury. He will start up front again as the Golden Eagles vie for their fifth straight winning season.

Quarterback Jack Abraham also finished first in the league with a 73.1 completion percentage.

Thus far this preseason, Dorbeck has said that things have gone well. The team has grasped the knowledge of the offense pretty well and knows what they are doing scheme-wise.

He went on to express that the team had all summer to work on that on their own and it took just getting in the meeting room and learning what coaches want from them as they head into the new season to put it all together.

“It is not something that happens in a day,” Dorbeck said. “It took me two years to get it down pat, but you have to stress that to the younger guys.”