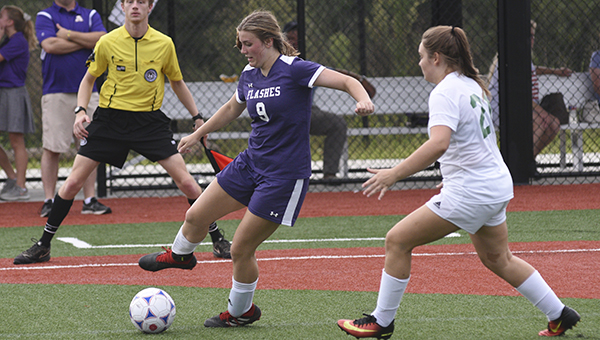 Ten months after they walked off the field a champion, the St. Aloysius Lady Flashes returned to it as a winner.

Ann Elizabeth Farthing, Meg McDaniel and Elizabeth Theriot each scored a goal, and St. Al buried two in the net in the last 15 minutes to beat Cathedral 3-0 in its soccer season opener on Thursday.

St. Al won the MAIS Class AAA championship last season, but that classification no longer exists. They’re vying for the Division II title this fall, and Thursday’s outing was a successful — if sluggish — first step toward that end.

Farthing scored in the first half for a 1-0 lead, and then the Lady Flashes spent a good portion of the match misfiring on some scoring opportunities on an oppressively humid day at Sports Force Parks on the Mississippi.

McDaniel finally broke through on a breakaway in the 60th minute, and Theriot scored in the 72nd minute to ice it.

“We had good transition, passing and support. They were showing a lot of technical ability,” St. Al assistant coach Maurice Gilliam said. “We’ve just got to finish.”

St. Al will return to action Tuesday, when it hosts East Rankin Academy at 5 p.m. at Sports Force Parks on the Mississippi. The Lady Flashes will play all of their home games this season at the new sports complex on Fisher Ferry Road.