The Titans seem ready to be Mississippi’s team 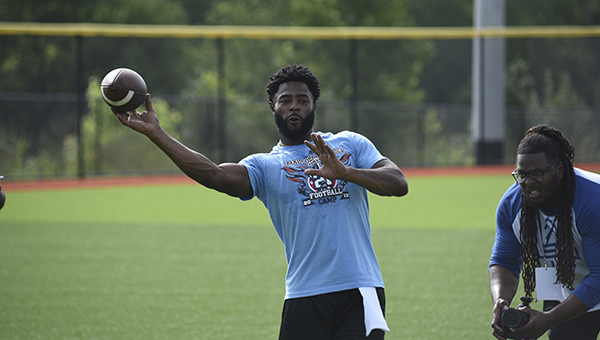 Malcolm Butler throws a pass to a camper during the 5th Annual Malcolm Butler Camp in July. Butler is one of three high-profile players from Mississippi that the Titans have acquired in the past two seasons. (Courtland Wells/The Vicksburg Post)

When they moved from Houston to Memphis in 1997, and then on to Nashville the next year, it might have seemed natural for the Tennessee Titans to become a favorite team among Mississippi’s NFL fans.

Mississippi is, by and large, Saints and Cowboys country. The Titans, though, had a team on the rise led by one of Mississippi’s greatest college football stars, quarterback Steve McNair, and enough geographical proximity to at least be the state’s AFC love interest.

The Titans faded after a successful run in the early 2000s and eventually became one of the blandest teams in the NFL. They haven’t won more than nine games in a season or the AFC South title since 2008, and have been boring — if not downright painful — to watch at times.
Like a deadbeat lover vowing to change their ways, however, the Titans are taking another run at winning the hearts of fans in Mississippi.

It started with the free agent signing of cornerback Malcolm Butler, a Vicksburg native, in the spring of 2018. That alone converted one county. Butler’s annual football camp in Vicksburg quickly switched shades of red, white and blue from those favored by the New England Patriots, his former team, to the Titans.

In this year’s draft, the Titans spent their first two picks on Mississippi State defensive tackle Jeffrey Simmons and Ole Miss wide receiver A.J. Brown. That gives another two-thirds of the state a stake.

How much this translates into new fans here remains to be seen. After all, each of the Mississippians is entering this season with various issues and could just as easily turn out to be busts as superstars.

Simmons won’t play this season while he recovers from a torn ACL. Brown has the potential to be a big star but suffered a minor injury early in training camp. Butler struggled the first half of last season, pulled it together over the last seven games, but needs to play well in 2019 to regain the fans’ trust.

The Saints will probably always be king here, and the Cowboys — especially with Dak Prescott quarterbacking the team — will also remain a favorite. If Butler, Brown and Simmons play prominent roles in leading the Titans to a Super Bowl championship in a few years, it’s not hard to see them finally gaining a foothold in Mississippi.