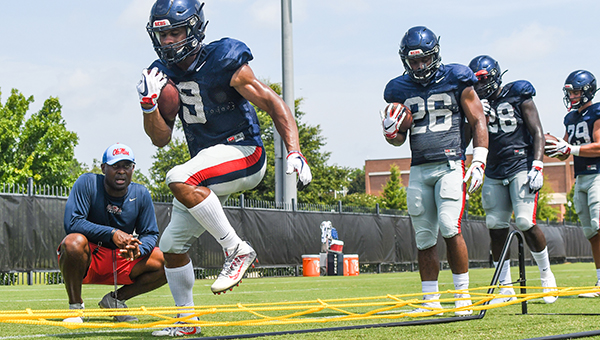 Ole Miss running back Jerrion Ealy goes through a drill during practice on Wednesday. Ealy and quarterback John Rhys Plumlee are both playing football and baseball for Ole Miss. (Bruce Newman/The Oxford Eagle)

OXFORD — Jerrion Ealy and John Rhys Plumlee grew up less than two hours away from each other, and were two of the top-15 high school football players in the state a year ago.

Along with being great football players, they were also two of the most sought-after baseball recruits in the state. Now, they’re both Ole Miss Rebels. You’d think they would know each other pretty well by the time they arrived at Ole Miss, but it wasn’t exactly the case.

“Once I made the decision to come here, and he did too, it was like ‘OK, we’re going to be seeing each other a lot,’” Ealy said. “We’re going to be going a lot of places together. We might as well build this relationship right now.”

There’s a pretty simple reason they’ll be seeing each other a lot. Not only are they building a quarterback-running back relationship, they will also be under baseball coach Mike Bianco’s tutelage at Swayze Field come the spring.

Plumlee and Ealy were not completely foreign to each other when they got to Oxford this summer. They had actually played at an East Coast Pro baseball camp together on the same team. They knew each other a bit from that, but nothing like they do now.
The two-sport life isn’t easy, and Plumlee said knowing there is someone facing the same challenges is going to be a tremendous aid later in the season.

“It helps a whole lot. It’s going to be very time-consuming and you almost get in a slump sometimes where you get so tired,” Plumlee said. “To have someone there that can do it with you and push you, I think it will help a whole lot.”

Two-sport athletes are not unheard of. Two recent No. 1 overall picks at quarterback, Kyler Murray in 2019 and Jameis Winston in 2015, played both sports at Oklahoma and Florida State, respectively. Both eventually dropped baseball and went exclusively to football.

Both Ealy and Plumlee look at it differently. They both ruled out the possibility of eventually dropping one sport at some point in the process to focus on the other.

Growing up in Hattiesburg, Plumlee said he never had an answer if someone asked him which sport he likes better. The dream has always been to play both sports in college, and at Ole Miss he has that opportunity. Since arriving in the summer, he’s also gotten pretty close with the other two true freshman quarterbacks, Grant Tisdale and Kinkead Dent.

Since showing up on campus, Plumlee is up to 200 pounds. He admitted he was maybe a step behind coming into fall camp, but thinks he’s almost caught up to where the other two are.

Neither Ealy nor Plumlee really talked to each other about their decisions throughout the recruiting process. However, Ealy also acknowledged how much easier it’s going to be to have his quarterback by his side when the two pick up a bat.

“The transition is so much easier with John,” Ealy said. “It makes it easier that you have someone to go both places with, someone late night to go hit with. It just makes life a lot easier having someone to throw with late night or go to the indoor facility.”

Ealy is going to see the field for Ole Miss this football season, the question is just how. He’s certainly behind at least one running back, Scottie Phillips, for the starting role. Both Ealy and Rich Rodriguez say the plan is to find ways to get Ealy in space, be it as a running back, receiver or returning punts.

Ealy is simply an athlete that can do a lot of different things. For a lot of his time at Jackson Prep, he was on the field with another running back and he also played some receiver.

“When you’re out there watching him run in workouts, you’re getting excited because he can do a lot of different things,” Ole Miss head coach Matt Luke said at SEC Media Days last month. “He can line up in the backfield. He can line up at slot. He can catch the ball out of the backfield. I think he’s going to bring a lot to the table and try to find a way to get him the ball in space.”